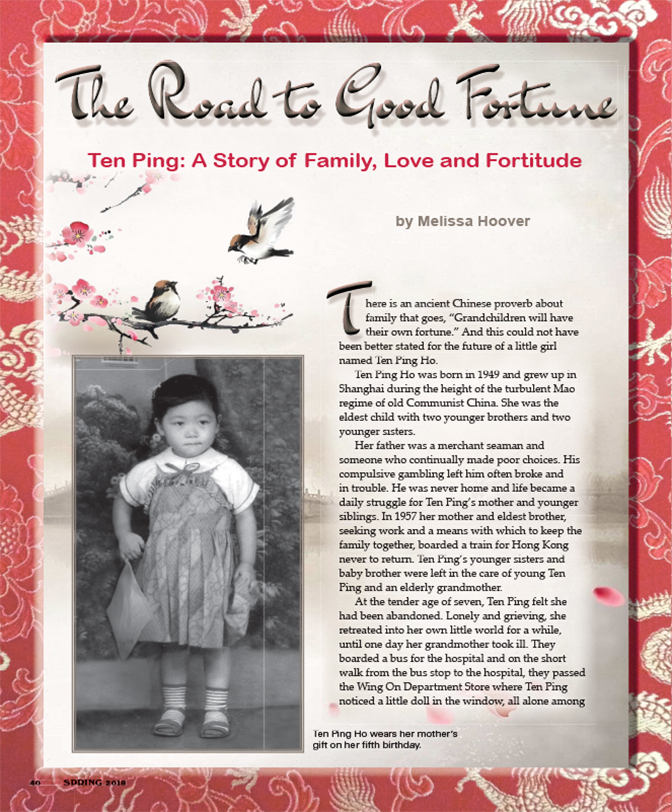 The Road to Good Fortune
by Melissa Hoover

Melissa's love for dolls began as a child, but it wasn't until 1989 that she became a true collector and doll "˜addict.'  As a doll artist, she began creating "˜to-scale' miniatures as accessories for dolls, and in 2011, finally succumbed to the delights of sewing for them.  Melissa has created her own patterns for doll clothing, including the patterns for and actual cobbling of doll shoes.  She fully accessorizes her dolls.  Her inspirations come from paper dolls, children's books, antique Etrennes, and anything that delights her.  Melissa has been a member of the UFDC since 2004, and she is currently a Member-at-Large.  Her home is in Auburn, California, where she shares it with my husband, two beloved dogs, and too many dolls to count. 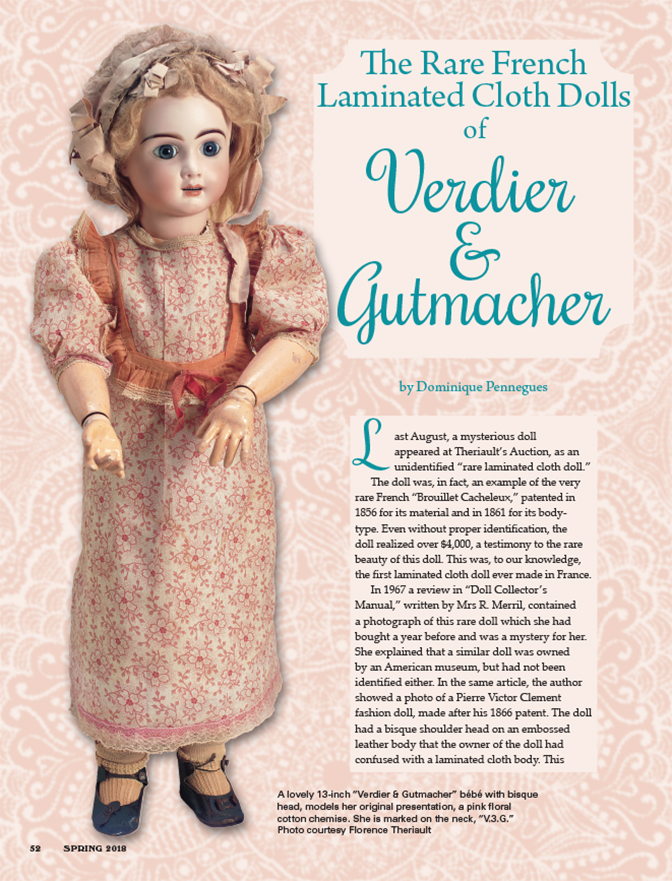 Dominique was born in Paris, France. She holds a diploma from Ã‰cole Supérieure de Journalisme de Paris and worked as an International Journalist until she became a mother, while working in Australia. She later returned to her studies in Paris to become a Social Worker, specializing in the care of young children in Montreal, Canada. Dominique's first encounter with antique dolls was when she was a toddler and she accidentally broke two antique dolls -- in two days. Thus, she grew up relating the unfortunate incident to antique dolls.  Her perception changed when she met François Theimer, who opened an antique doll shop in Montmartre, close to where Dominique lived. She soon became a collector of antique French bisque dolls.  In the mid-1980s, Dominique discovered that French celluloid dolls had not really been studied, and following research, her subsequent articles were published in DOLL READER magazine. Later, Dominique found that antique and vintage French cloth dolls were a relatively unknown territory and she decided to focus on them. Dominique has published informative and well-researched articles in Antique Doll Collector, DOLL NEWS and Carrusel magazines. She   presented lectures about French cloth dolls when attending UFDC National Conventions.  While antique dolls may be her passion, Dominique is very interested in the artistry of the modern BJD creations, having been a BJD enthusiast and collector for about fifteen years. 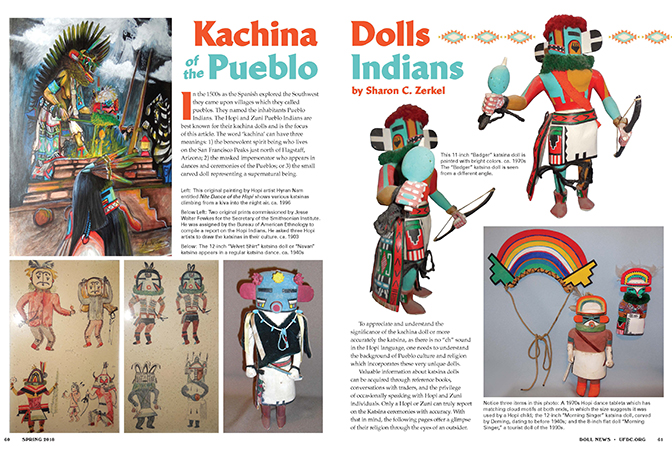 Kachina Dolls of the Pueblo Indians
by Sharon C. Zerkel

Sharon C. Zerkel joined UFDC in 1981.  She has served in various  positions both at the national and the local level.  She is a judge and presently the Instructor of Student/Apprentice Judge Program with emphasis on the antique division.
Sharon is an active member of the Fort Myers Doll Club and has held several offices. She presently serves as Recording Secretary.
Her Florida Seminole Indian dolls have been exhibited in the Mingei International Museum in San Diego, California, representing the state of Florida. She enjoys presenting doll programs to various groups in the community and nearby cities.
She has penned several children stories with Native American themes and has authored a reference book on Native American Indian dolls.
Sharon can be reached at heritagedolls.zerkel@aol.com. 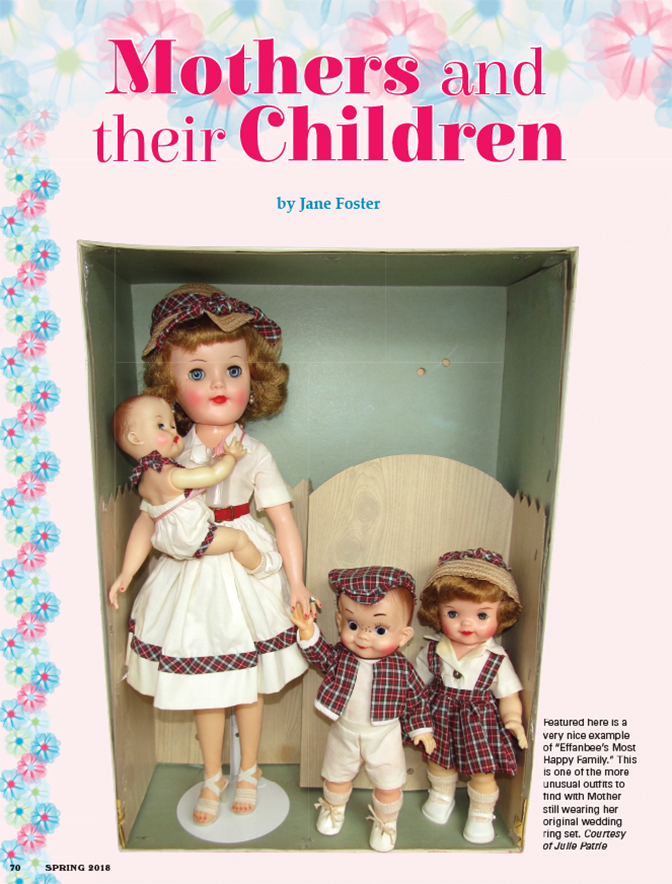 Mothers and Their Children
by Jane Foster

For thirty-eight years, Jane Foster was an elementary school teacher.  Following which, she taught reading on a part-time basis at the elementary school level for five years. She is a member of Randolph Street Baptist Church and the Kanawha Valley Doll Club. Jane has written articles for DOLL NEWS and Antique Doll Collector, as well as Doll Collector (formerly Contemporary Doll) magazines. Jane's most recently-published literary effort is a children's book entitled Dime Store Days.  Dolls from the 1950s are of special interest to Jane. Effanbee's Patsy, Ideal's Shirley Temple and related memorabilia, and Nancy Ann Show Style dolls comprise most of her collection. Jane and her husband continue to live in her native town of Hurricane, West Virginia. 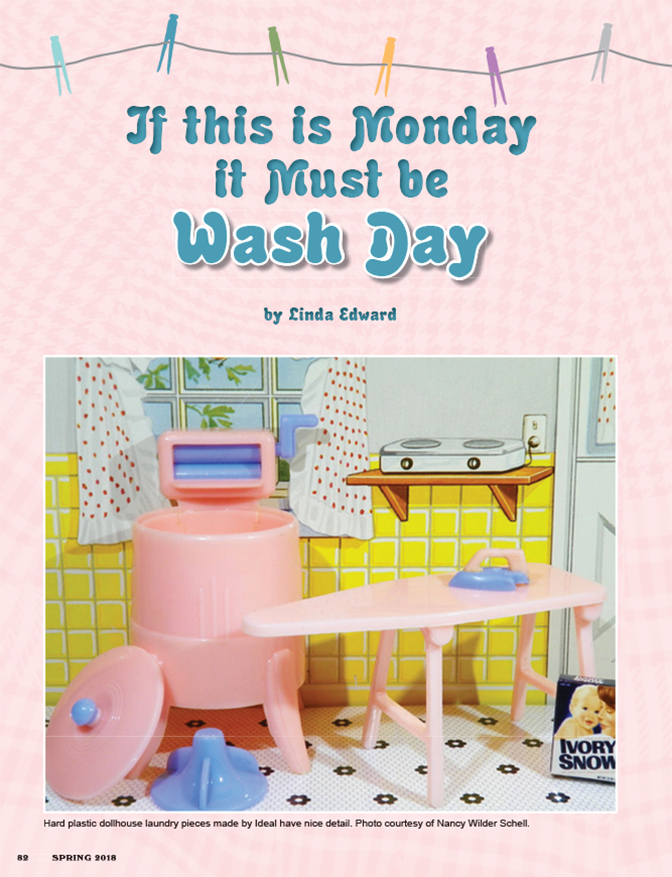 If This is Monday, It Must be Wash Day
by Linda Edward

Wife, mother, grandmother, doll fanatic.  Linda is a dealer in antique and vintage dolls, providing services in doll repair and restoration, appraisal, museum collection consultation, and reproduction costuming. She served as Past President of the United Federation of Doll Clubs, Inc., Past President of The Doll Collectors of America, Inc., and past Director of Region 14, UFDC.  In 2006, Linda was the recipient for the UFDC Award of Excellence for Educational Endeavors Through Dolls, and in 2009, she received the UFDC Award of Excellence for Contributions to DOLL NEWS, as well as having served as Editor of DOLL NEWS.

For eighteen years Linda operated The Doll Museum in Newport, RI., which closed in 2005. She was recognized in 2006 with the Rhode Island State Senate Citation for receiving the UFDC Award of Excellence for Educational Endeavors Through Dolls. Linda's research has led to the publication of numerous books, including a series of Doll Values, Antique to Modern editions and Cloth Dolls from Ancient to Modern as well as many articles for various doll magazines.  Linda is currently a member of the Ida Lewis Doll Club in Rhode Island. 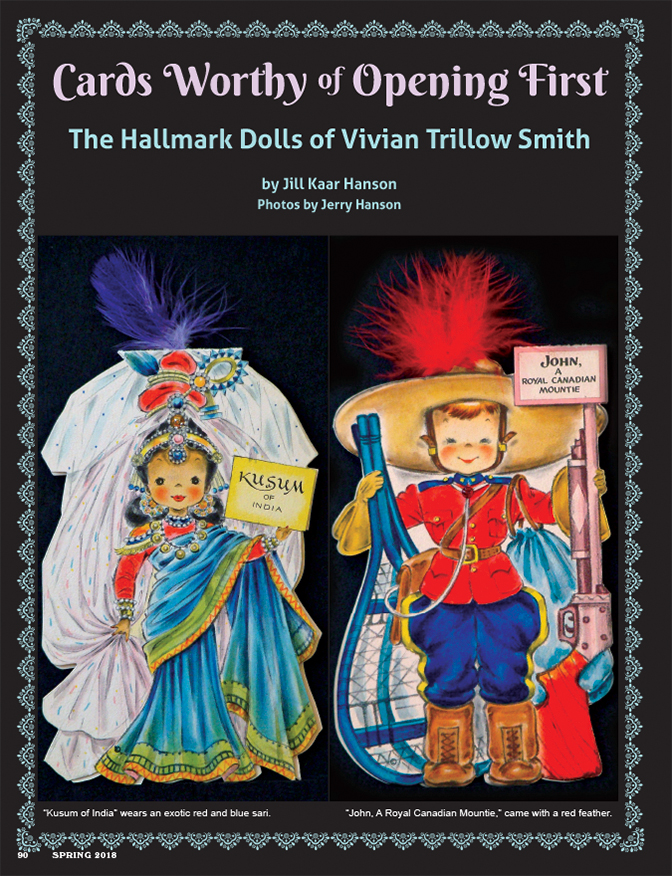 Jill Kaar Hanson has been a collector of dolls all her life.  She loves hard plastics that look like Santa just left them under the Christmas tree and American artist dolls, but her greatest joy is paper dolls.  From her mother's Dolly Dingles to the work of today's best-known artists, she enjoys them all. Jill served as Region 10 Director from 2005-2008. Jill and her husband, Jerry, have served as the Chairmen of Helpers for UFDC's Annual Convention, from 2012 until 2017. She currently serves on the UFDC Fundraising Committee. Jill is a member and Past President of The Lake County Doll Collectors of Illinois.

Laurie McGill joined UFDC in 1974 and served as Regional 3 Director (2005-2008). On a local level, Laurie is a member of the Dallas Doll Club, serving as its president (2002-2006 and 2012-2016). She was the associate editor of DOLL NEWS (Winter 2012-Fall 2013) and editor of DOLL NEWS (Winter 2014"“Fall 2015). Currently she is a member of the UFDC Doll Museum's Collections Oversight Committee. Laurie was the 2004 winner of UFDC's Audio Visual contest with her biographic entry, "Once Upon a Time—The Story of the Dixie Doll" about twentieth century novelist and early doll collector, Frances Parkinson Keyes. She was editor of UFDC's 2013 convention souvenir journal, A Capital Affair. Laurie was honored to receive UFDC's Award of Excellence for Educational Endeavors in 2008 and the Award of Excellence for Contributions to DOLL NEWS in 2014. She is a frequent presenter of seminars and programs at both regional conferences and national conventions.  The inspiration for the "Department Store— Annual Dolls' Tea Parties" article came from seeing an Emery Bird Thayer teacup in the UFDC Doll Museum in Kansas City. When the teacup, on display for many years, was taken off view, Laurie decided to find one for her personal collection. A quick Internet search opened a new window of research into these delightful souvenirs of yesteryear. 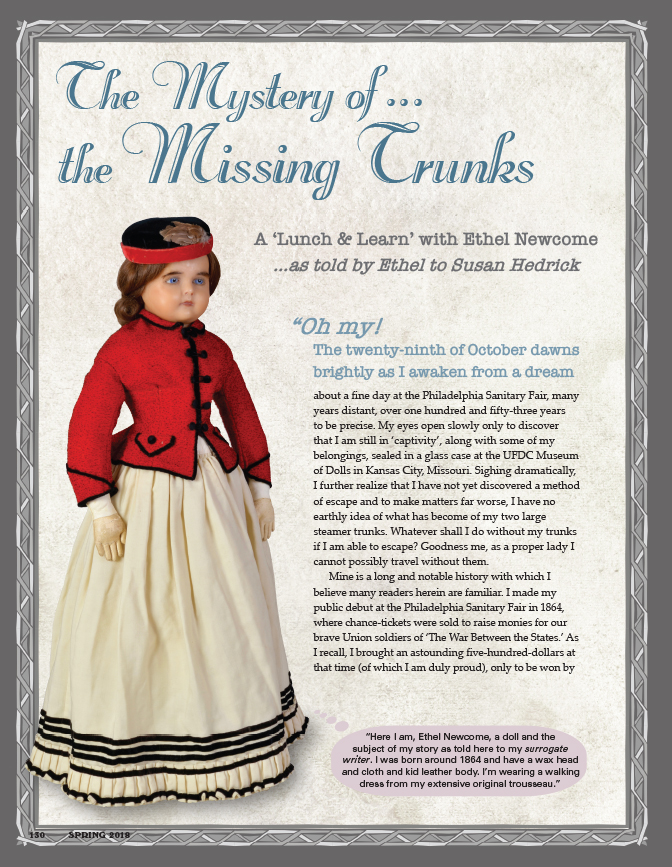 The Mystery of the Missing Trunks
by Susan Hedrick

The dolls who have gone to live with Susan Hedrick say that she's been collecting for most of her adult life and her collection is notoriously eclectic. They boast proudly that life with her has been mostly exciting, as she once was curator for the Rosalie Whyel Museum of Doll Art for many years.

Susan's dolls say she is retired now but spends time on the Curatorial Oversight Committee of UFDC's own doll museum in Kansas City where she now resides.  She also serves on the staff of DOLL NEWS Magazine. Hardly enough to keep her busy, the dolls say she haunts thrift stores and the occasional estate sale for finds. She also acts as an appraiser of antiques and the like. Susan is currently a member of the Heirloom Doll Collectors Club of Greater Kansas City. 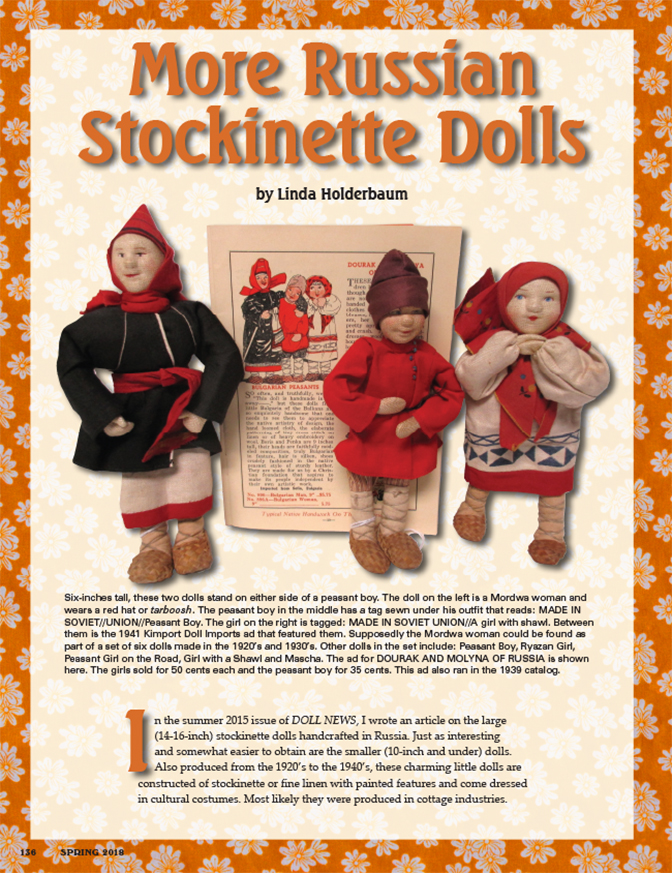 Linda has been collecting dolls since the 1960s.  While ethnic dolls have always been her first love, her collection includes antique to modern and everything in between.  She is currently the Executive Director of the Art Center of Battle Creek with extensive museum collection background.  She was the chairperson of the 1989 UFDC Region 12 Conference in Battle Creek. She was a judge for the Timbertown Dollology Club's annual competition for ten years and for the Fort Wayne Doll Club's annual competition for fifteen years.  She also writes for Antique Doll Collector's Magazine. 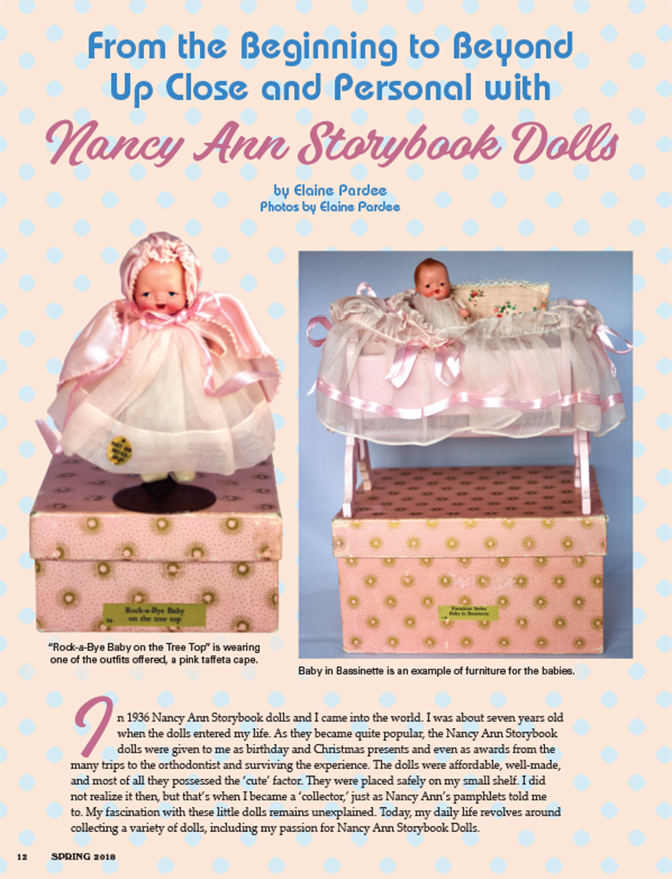 From the Beginning to Beyond,
Up Close and Personal with Nancy Ann Storybook Dolls
by Elaine Pardee

Elaine Carlsen-Pardee was born in Detroit, Michigan in 1936 and moved to California in 1958. Over the course of the last thirty years she has belonged to six UFDC doll clubs.  She has given lectures, organized study groups and displays, written articles for magazines, such as DOLL NEWS, and authored and published two books, Encyclopedia of Nancy Ann Storybook Dolls, Vol.1, and Vol. 2.  Elaine received UFDC's "Award of Excellence for Exhibit of Dolls" in 2006, and UFDC's "˜Award of Excellence for Meritorious Service" in 2014.