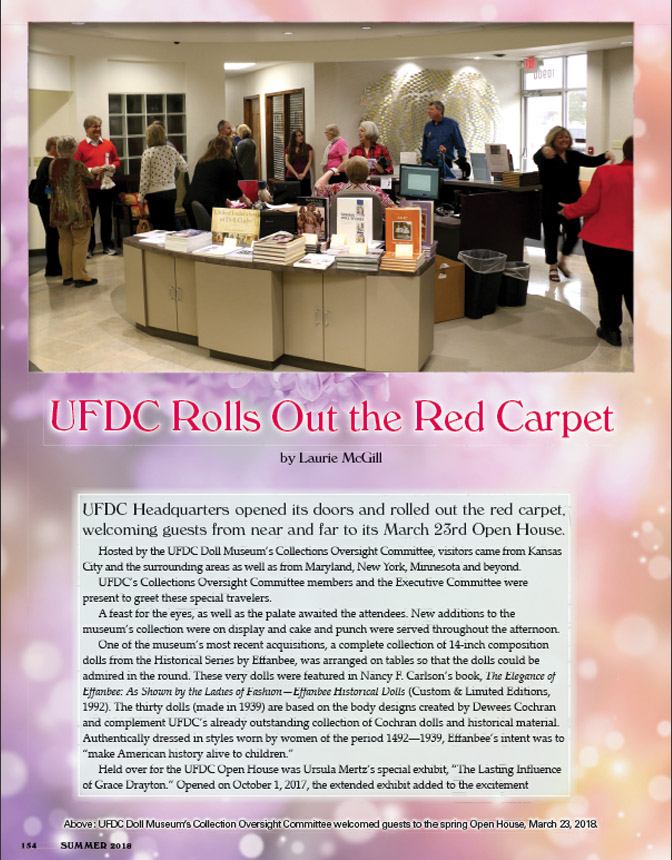 UFDC Rolls Out the Red Carpet

Laurie joined UFDC in 1974 and served as Regional 3 Director (2005-2008). On a local level, Laurie is a member of the Dallas Doll Club, serving as its president (2002-2006 and 2012-2016). She was the associate editor of DOLL NEWS (Winter 2012-Fall 2013) and editor of DOLL NEWS (Winter 2014"“Fall 2015). Currently she is a member of the UFDC Doll Museum's Collections Oversight Committee. Laurie was the 2004 winner of UFDC's Audio Visual contest with her biographic entry, "Once Upon a Time—The Story of the Dixie Doll" about twentieth century novelist and early doll collector, Frances Parkinson Keyes. She was editor of UFDC's 2013 convention souvenir journal, A Capital Affair. Laurie was honored to receive UFDC's Award of Excellence for Educational Endeavors in 2008 and the Award of Excellence for Contributions to DOLL NEWS in 2014. She is a frequent presenter of seminars and programs at both regional conferences and national conventions. 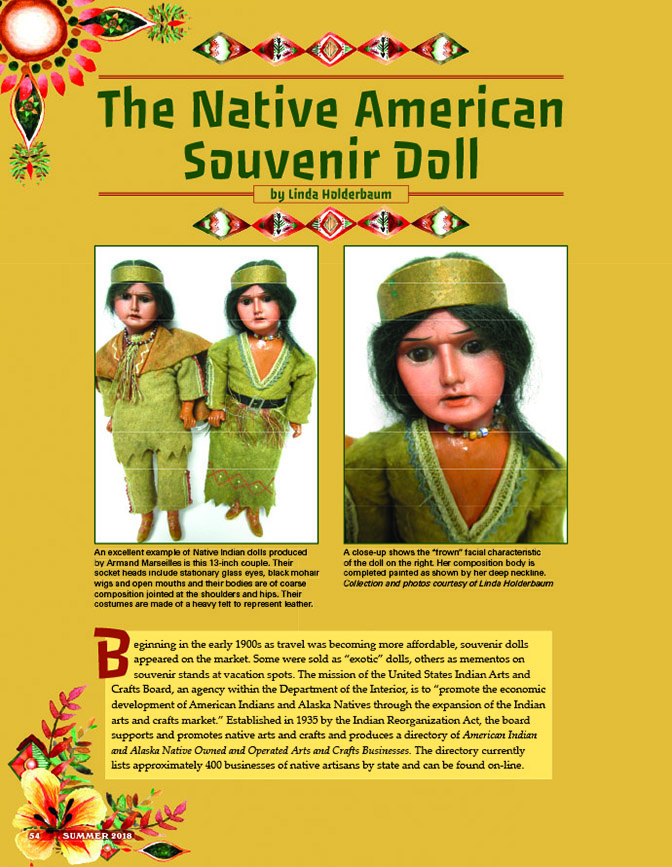 Linda has been collecting dolls since the 1960s.  While ethnic dolls have always been her first love, her collection includes antique to modern and everything in between.  She is the executive director of the Art Center of Battle Creek with extensive museum collection background.  She was the chairperson of the 1989 UFDC Region 12 conference in Battle Creek. She was a judge for the Timbertown Dollology Club's annual competition for 10 years and for the Fort Wayne Doll Club's annual competition for 15 years.  She also is a writer for Antique Doll Collector's Magazine.

Jill has been a collector of dolls all of her life. She loves hard plastic dolls that look like Santa just left them under the tree and American artist dolls, but her greatest joy is paper dolls. From her mother's Dolly Dingles to the work of today's best-known artists, she loves them all. Jill has served as President of The Lake County Doll Collectors of Illinois for three terms. She served as Region 10 Director from 2005-2008. Jill and her husband and doll photographer, Jerry served as the UFDC Convention Helper Room Chairpersons from 2012 until 2017. She currently serves on the UFDC Fundraising Committee.

"England's Rose" Dolls in the Likeness of Diana, Princess of Wales

Valerie is a retired teacher-librarian, living in British Columbia, Canada with

large doll collection and two furry house-mates, "Dolly" and "Kaedé," Shiba Inus (very cat-like Japanese dogs). Although dolls have been part of her life almost from birth, it was not until her father, a member of the Royal Canadian Air Force, was transferred to a NATO base in West Germany that she developed a serious desire to collect dolls. She favored dolls in traditional costumes and began collecting dolls from the Black Forest, Germany. After moving back to Canada and graduating from the University of Alberta, she spent the next thirty-five years as an elementary school teacher and librarian. Other dolls that interested her were Japanese and Martha Thompson dolls.

Valerie received her first Ashton Drake Princess Diana doll as a birthday gift from her mother, but she found her real Princess Diana doll passion when she saw an ad for the first Franklin Mint Princess Diana doll in the "Elvis" dress. Her passion for the royal princess dolls has led to on-line group friendships with fellow Princess Diana doll fanciers. She is in the process of writing a book about the dolls, entitled The Incomplete Book of Princess Diana Dolls, aptly named as she "came to the conclusion that she can never hope to learn about every single one of the dolls made to represent Princess Diana." Valerie welcomes correspondence with any collector willing to share information and photos about Princess Diana dolls that are special to them. Contact Valerie at:  vbreathet@gmail.com.