The Elegance of Ernestine — Grande MaÃ®tresse de la Couture
by Lori Santamaura and Juliette Peers,
in collaboration with Janet Hollingsworth

Lori Santamaura is a recently retired educator of 35 years, named to Who's Who in America's Teachers. Her credo, "Learning is not attained by chance, it must be sought for with ardor and attended to with diligence" (Abigail Adams), fueled not only her profession but her doll avocation. She joined UFDC in 1997 and held the office of Secretary in California Doll Collectors of Orange County. She revived the Traveling Doll & Book Exhibit for Region 2-S and took it on the road. Lori is also an active member of the Carmel Doll and Toy Study Group. She has attended numerous UFDC conventions and conferences, volunteering as a Monitor in the Antique Competitive Exhibit and serving as a Judge, and feels privileged to have completed the Apprentice Judge Program under the direction of the late Maurine Popp. She contributed two essays for the 57th National UFDC Convention 2006 Souvenir Journal, "Tell Me a Story." Lori proudly served from 2009-2011 with Editors Michael Canadas and David Robinson as the Associate Editor of DOLL NEWS. A study of dolls led her to collect early Wooden and Papier-mÃ¢ché examples; she found a niche in early French Fashions and specialty Bébés as well. The fruits of Lori's labors of love for the dolls, researching and delving into their past, have been shared in Antique Doll Collector magazine, with husband Sal contributing the photography.

Juliette Peers is an art, design and cultural historian working at RMIT University, Melbourne, Australia, in the School of Fashion and Textiles, the School of Architecture and Design and in the Spatial Information Architectural Laboratory (SIAL). She is widely known in Australia as a historian of women's art, nineteenth century fashion and nineteenth century sculpture. She is recognized internationally for scholarship on nineteenth century sculpture and as one of a handful of academics who have published on doll subjects beyond the perennial university researchers' attraction to Barbie, Bratz and Blyth. Recent publications include The Fashion Doll from Bébé Jumeau to Barbie, Berg Publishers, Oxford, England; entries for the groundbreaking Encyclopaedia of World Dress and Fashion, (UK) a major essay on doll history from the nineteenth to twenty-first centuries; entries (Mattel, Fulla, the Flavvas and others) for the Girl Culture Encyclopedia (USA) as well as articles in many scholarly journals, including the Journal of Art Historiography, Journal of Australian Studies, Australasian Victorian Studies Journal and public gallery exhibition catalogs in Australia. She has performed regular freelance curatorial work in Australia and also enjoys classical choral singing along with occasional opera chorus work. She derives great satisfaction from researching and collecting dolls and is a member of a number of doll clubs, including the Fashion and Celebrity Doll Collectors of Melbourne (Australia) and "“ at a long distance, with much warm thought but little real-time presence "“ the Carmel Doll & Toy Study Group.

Comfort and Sanctuary —
Dolls Along the Underground Railroad
by Karen Kurtz

At age 12, Karen B. Kurtz began to collect antique dolls. She found Ethel, a Hertwig china with gold-painted name, and Minerva, a paint-starved tin head, lying in a neglected trunk in her grandfather's attic. Quickly cabbaging onto them, she added them to her large storybook and baby doll collection. She has continued to search out antique dolls ever since.

Today Karen has a strong platform in nonfiction and dollology, in addition to a unique doll collection. In July 2010 at the Chicago convention, Karen won UFDC's Coleman. The Coleman award jumpstarted a three-stage, multi-year project to document true stories of Civil War dolls, circa 1830-1870. Karen's work is very timely as we celebrate the Sesquicentennial of the Civil War, 2010-2016, because her work preserves a segment of our diverse American heritage, provides new knowledge, expands relevant studies, and supports artistic creativity.

A former elementary teacher, college administrator, editor, publisher, and consultant, Karen holds a master's in education from Indiana University. Her biography is listed in Who's Who in the World and Who's Who of American Women, among several others. She is a long-time member of UFDC, Society of Children's Book Writers and Illustrators, and a public speaker. Now completing work on a DVD in fulfillment of The Coleman funding requirements, she is also developing magazine articles and children's book manuscripts. Her work crosses both adult and juvenile markets.

Karen, Mark, and their feisty Fox Terrier, Hawker Jett, happily divide their time between Indiana and the Eastern Shore of Alabama.

Home for the Holidays, Barbie Style!
by Bradley Justice

Former Region 8 Director for UFDC, and Curator for the Doll and Miniature Museum of High Point, North Carolina, Bradley Justice has devoted most of his adult life to his hobby. Although a lover of antique French fashion dolls and cloth dolls from his home state of North Carolina, he has recently returned to his original passion, the Barbie doll. Bradley has curated three museum exhibits with Barbie as the subject, as well as written and presented many programs on the subject. A founding member of the Queen Anne's Revenge Doll Club, Bradley is a member of three additional UFDC doll clubs and currently devotes much of his time to his store in Chapel Hill, North Carolina, The Swell Doll Shop, where he deals in vintage and modern dolls and teaches workshops on doll costuming. Bradley was the recipient of the 2008 UFDC Award of Excellence for the Display of Dolls. 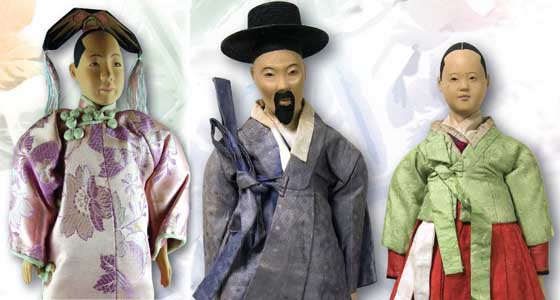 Door of Hope Dolls and Mission: My Journey of Discovery
by Janet Orr

I am a retired Registered Nurse. I joined UFDC in 1992 as an MAL, but was thrilled when Vintage Doll Club of Southern Ontario started a club in 1998.

I made all the usual mistakes as an early doll collector, buying the first doll I saw, paying way too much for very unimportant German dolls, not leaving a doll show until I had "a doll" to bring home. Luckily I have advanced considerably with my collecting skills.

It was the 2002 UFDC Convention in Denver that changed everything when I heard the late Barbara Steiker talk about Door of Hope dolls.

The person I must thank the most in my quest for knowledge is my husband Jack. As I learned about a museum with a collection of these dolls, he would plan a little trip and we would be off to see them.

The same thing after I had corresponded with Ashley Wright and Mary Eveline Sicard, both pioneers in researching the Door of Hope mission and the dolls. We visited both of them in their homes.

Our local library was wonderful in obtaining books for me, most printed years ago and not the average read.

I would encourage anyone that had more than a passing interest in a type of toy or doll to try doing some research. Staff in museums, archives and libraries are very helpful. 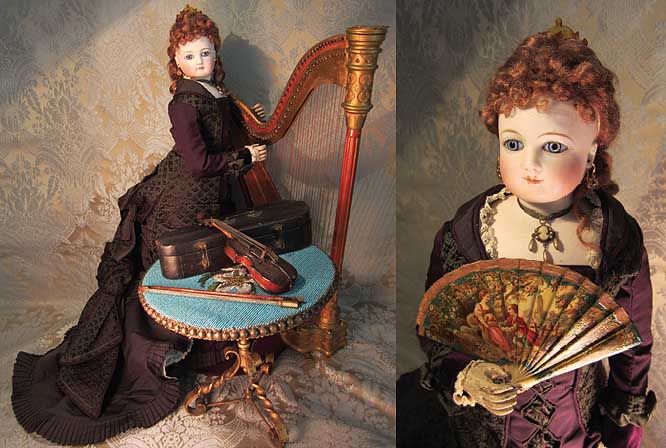 Liz Quaday, a confirmed collector of just about anything from the time she could toddle about with her "finding bag", got hooked on antique dolls in the 1980's. She joined the California Poppies Doll Study Club in the San Francisco area at that time and began honing her "collector's eye" through researching antique French dolls. Liz is a professional freelance illustrator by trade, and enjoys applying her artistic talents to her collection of French fashion dolls. In 2009 she opened a web boutique on Rubylane.com that specializes in antique clothing and accessories for French fashion dolls; aptly named Mlle. Bereux. Liz loves to correspond with other collectors who share her passion for antique Parisiennes, and you may contact her through her shop online at www.mllebereux.rubylane.com, or directly by email at liz@mllebereux.com.