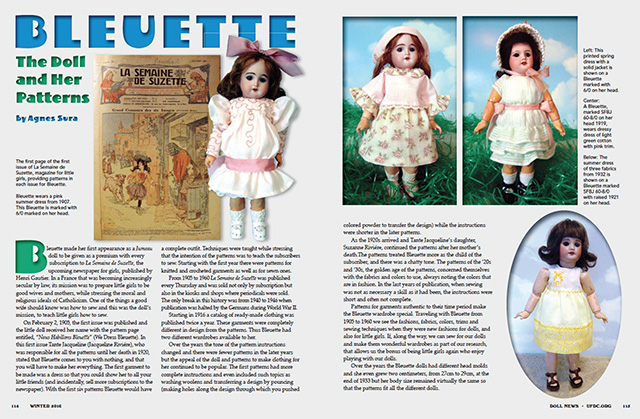 Bleuette, The Doll and Her Patterns

Agnes Sura enjoyed making clothes for her dolls as a child, then making a wardrobe for a mannequin she received for Christmas. In high school she made two small cloth dolls with wardrobes to be raffled off at the school fair and developed a pattern to fit into the Junior Red Cross boxes for displaced children in Europe. She made twelve of these dolls for the charity. She also learned that there were antique dolls but had no idea how to find them.

In college, while she made several dolls as gifts, her concentration was theatre, specifically as costume manager for school productions and dolls took second place. When her first child, a girl, was born she once again made dolls and stuffed toys from magazine patterns and wardrobes for commercial dolls. A doll show by the Shaker Doll Club gave her a look at antique dolls and places to buy them. Within the year she had enough dolls to gain membership in the club and her real doll collecting began.

Early dolls of papier-maché, wax, china, bisque and cloth were her favorites, especially if they had wardrobes. Each doll needed to be researched to find out more about the doll and the maker. In the mid 1990s she learned about Bleuette, the little French doll with not one but two wardrobes, one from patterns in a magazine and one of ready-made clothing from a catalog, and it was love at first sight. She edited BLEUETTE'S WORLD, a quarterly publication in which the French patterns were translated and made up, for twelve years, from spring 1999 to winter 2010-11. She has published translations of Mme. Colette Merlen's two books about Bleuette and as well as authoring several other books about Bleuette and writing articles for several doll magazines.

Agnes has served as Assistant Editor of DOLL NEWS and has presented programs, seminars and workshops both at UFDC conventions and at regional conferences. Although known best for her interest in Bleuette, cloth dolls (particularly those made by or from patterns or kits by Edith Flack Ackley), and Dennison paper dolls, Agnes is interested in all types of dolls from antique to vintage, from papier-mÃ¢ché to cloth, bisque to wood, from new to old and everywhere in between. She is a DOLL collector.