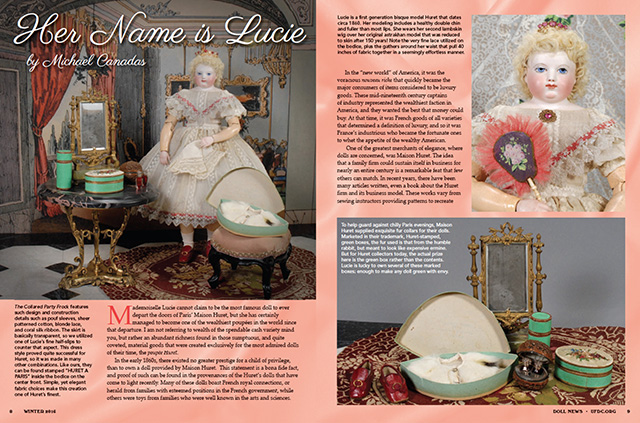 Her Name is Lucie

Our feature article author, Michael Canadas, is well known in the world of antique dolls. In 1989, along with partner David Robinson, they founded the Carmel Doll Shop, an antique doll business that is now operating in Pacific Grove, California. Since that time, the shop has become a destination for collectors of fine dolls, dollhouses and all things relating to childhood past.

Michael has given countless presentations for the United Federation of Doll Clubs through the years, and has helped stage special exhibits at UFDC conventions. Deserving special mention is the French fashion doll exhibit that was presented at the Toy and Miniature Museum of Kansas City, for which Michael and David were awarded the UFDC Award of Excellence in 2005.

Most recently, Michael and David served as volunteer editors for the UFDC publication DOLL NEWS, a position for which they received yet another Award of Excellence from the organization in 2011.

Beautiful bodies of Huret from 1855-1865 Recreated

Sheryl Williams is an avid researcher. She finds authentic costuming of antique and reproduction of porcelain dolls is her passion. A firm believer in education, she travels extensively teaching seminars for the Doll Artisan Guild and teaching porcelain doll making and costuming seminars. A frequent lecturer at doll events worldwide, she has also presented seminars at UFDC National Conventions about doll costuming, ribbon art, pattern design, and most recently about the study and sewing techniques used in antique doll clothing.

An active member of UFDC, the Beecher Doll Club of Region 14 is her club. She is Director of Competition for the Doll Artisan Guild and is a judge at UFDC national conventions.

Sheryl lives in Elmira, New York with her husband and two very busy Savannah cats. She loves to travel and is frequently on the go.

Betty Stewart, always a lover and collector of dolls, she has only recently been involved in her local UFDC doll club "“ the Fort Collins China Doll Club (celebrating their 50th year in UFDC). She became a member in 2011 after retiring from 25 years as a high school English teacher.

In the five years she has been a member of UFDC, Betty has served four years in officer positions in her club and attended two national conventions. Her collection includes a variety of vintage and modern dolls, but she is interested in dolls of all kinds. She has learned so much from her fellow doll club members and plans to continue researching, studying and writing about the exquisite world of dolls as long as possible. 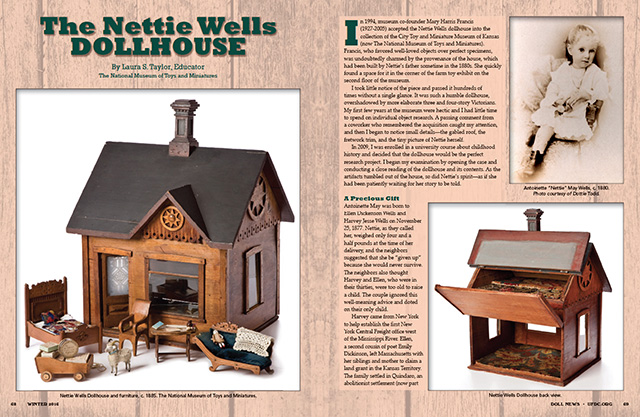 Laura Taylor is the museum educator for The National Museum of Toys and Miniatures in Kansas City, Kansas.   Her museum career has spanned two decades and has included positions at Historic Mount Vernon and Hillwood Museum and Gardens.

Laura can be contacted at: taylorls@toyandminiaturemuseum.org.

Nettie and her mother were members of the First Congregational Church, which operated a very successful children's Sunday school and, starting in 1886, an "Afternoon Club." The club was a missionary endeavor to involve children with no other religious opportunities or affiliations. 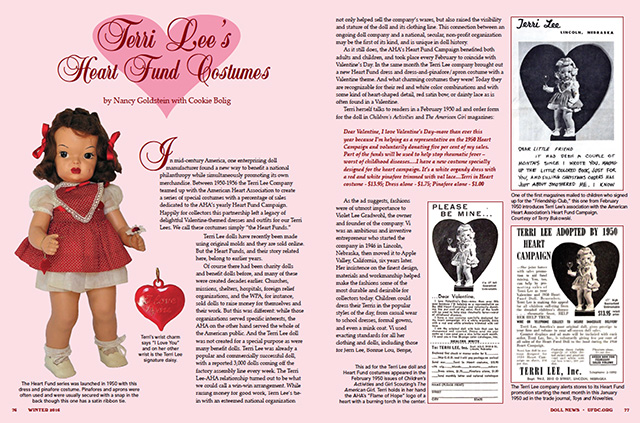 Nancy Goldstein is a Terri Lee collector who has written about Terri and other dolls for DOLL NEWS and for The Daisy Chain, the Terri Lee newsletter. She authored Jackie Ormes: The First African American Woman Cartoonist (University of Michigan Press, 2008) a biography that includes a chapter on the Patty-Jo doll and black dolls. Nancy is a member of Ann Arbor Doll Collectors.

Darlene Bolig, better known as Cookie, has collected dolls for over 30 years. Although her collection if focused on Terri Lee, it also includes Mary Jane (a Terri Lee copycat doll), Mary Hoyer, and Toni dolls. She has been a member and attended conventions of UFDC since 1998 where she clerked and assisted judges in modern competition.   She recently co-presented a Dynamic Dialogue about the Heart Fund Terri Lees. She also co-presented a session for the Daisy Chain Convention on the Mary Jane Doll. Cookie is currently a member of the Lehigh Valley Doll Study Club.

Nancy can be contacted at: njgoldstein@yahoo.com 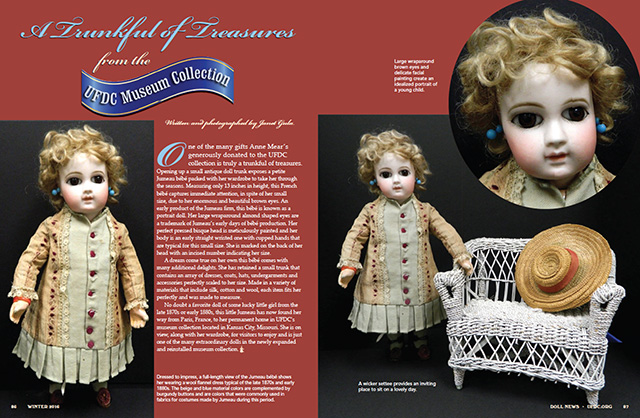 A Trunkful of Treasures from the UFDC Museum Collection

Janet Gula, our UFDC President, has always had a passion for anything French when it comes to dolls.   An avid collector, Janet has contributed numerous articles to DOLL NEWS and other publications. She has served on the Executive Committee since 2009 and served as Director of Region 16 from 2002 to 2005.   She is an accredited judge and was mentored by the late author and researcher, Mary Krombholz.   When serving as Director of ReAL Services, she had the opportunity to work first hand with the dolls generously donated to the UFDC by Anne Mears.   One particular little Jumeau really captured Janet's heart and is the focus of the article.   Janet "adopted" this doll through the "Adopt a Doll" program, a fundraising initiative that supports the preservation and conservation of the dolls in the UFDC collection.    It wasn't until the doll was being placed in its new home in the UFDC Museum that Janet discovered that the petite doll also owned a trunk full of tiny treasures!   Janet divides her time between her northern home in Toronto, Canada and her southern home in Naples, Florida.   She belongs to three clubs; the Vintage Doll Club of Southern Ontario, the Naples Doll Club, and Les Rubans Aubergines. 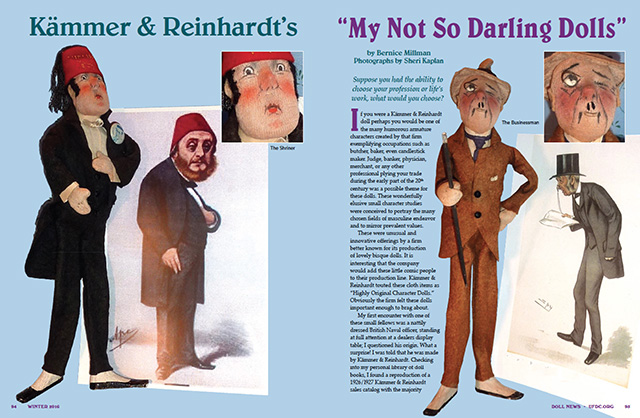 Kammer & Reinhardt's "My Not So Darling Dolls"

BERNICE MILLMAN was born and raised in Baltimore, Maryland, where she still lives. From her childhood she had a love of dolls, but she owned only a few since she was a child of the depression era. Bernice attended the Maryland Institute of Art, married her childhood sweetheart, Jerry, a family practice dentist. She has three children and six grandchildren. She began seriously collecting dolls in the late 60s. At first she collected composition dolls, the dolls of her childhood, then shifted her interest to bisque, collecting German and a few French dolls. Shifting again, this time she to became interested in primitive dolls. Following the primitives, she began collecting cloth dolls which is what the majority of her collection consists of today including: Kamkins, Kathé Kruse, Martha Chase, Lenci's and also other French, German, Italian and  American cloth dolls. Bernice also enjoys a small collection of countertop mannequins and a few papier-mÃ¢che' dolls. At UFDC national conventions Bernice has conducted Doll Dialogues and seminars, and she has presented special exhibits. She contributed an article published in UFDC Convention Journal of 2006 and has written articles about antique dolls that have been published in various doll magazines. Bernice is a member three local (Maryland) doll clubs and the Doll Club of Great Britain. 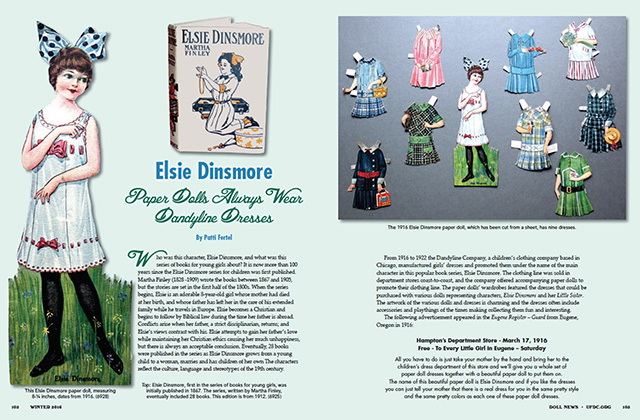 Patti Fertel, a retired mental health counselor and therapist, has been an avid paper doll collector since 1974 when she first re-discovered paper dolls after seeing an antique replica at a museum. She has been a member of the Olentangy Valley Doll Club in central Ohio and a member of UFDC for 20 years. A frequent contributor to Doll News, she is also a paper doll and altered book artist. Patti has given many programs on collecting antique paper dolls and has given paper doll workshops at regional and national conventions. Currently, she is also a docent at the Wexner Art Center and the Billy Ireland Cartoon Library in Columbus, Ohio.