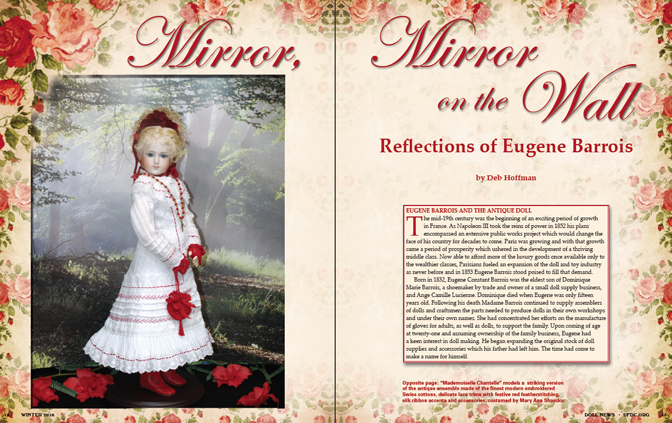 Deb Hoffman is a UFDC member-at-large of 10 years whose doll collections includes both antique and reproduction examples. As a freelance author, she enjoys reading, researching and writing historically-based articles. She has written for Antique Doll Collector magazine and DOLL NEWS. She has also been involved in the co-publication of small self-published circulars such as The French Fashion Doll Revue where she managed research, writing, layout, graphics and production for several years. Deb enjoys the outdoors and lives on "The Continental Divide" in the beautiful Rocky Mountains of Colorado on a small family ranch with her husband and daughter.

Rebekah Kaufman is a third generation lifelong Steiff enthusiast. Her personal collection of vintage Steiff treasures numbers north of 1,600. Rebekah's German grandmother kindled her love for the brand over four decades ago, and today Rebekah is the proud steward of many of her Oma's Steiff treasures. Rebekah's passion became her vocation when she became the Steiff Club Manager for the North American division of Margarete Steiff GmbH in 2003.  A few years later, in 2008, she changed jobs and was appointed to the position she holds today - that of Steiff's North American archivist. In this role, she leads collector's events around the country, authors most of the vintage-related articles in the bi-annual Steiff Club Magazine, and authenticates and values vintage Steiff treasures on behalf of the company.   In 2014 at James D. Julia Auctioneers in Fairfield, Maine, she appraised and cataloged the largest and most important vintage Steiff collection to come to market ever in North America; the sale realized over half a million dollars. Since 2015, she has consulted with Morphy Auctions of Denver, Pennsylvannia as a Steiff and Fine Plush Expert where she identifies, values, and catalogs treasures for the company's fine doll and Teddy bear auction events. Rebekah owns and merchandises "Steiffgal's Vintage Museum Marketplace," the largest online vintage Steiff shop worldwide. It can be found at www.rubylane.com/shop/steiffgal.

Rebekah is a regular contributor to national and international print publications, including Teddy Bear and Friends, DOLLS, DOLL NEWS, Antique Doll Collector, and Kovels on Antiques and Collectibles. She is the North American Teddy bear and doll correspondent for the German media company Wellhausen & Marquardt, where she updates the European collecting communities on North American happenings through their magazines PUPPEN & Spielzeug and TEDDYS kreativ.

Rebekah is an active member of United Federation of Doll Clubs and is the Second Vice President of Doll Study Club of Boston. She has consulted for TV networks including HGTV, CBS Inside Edition, History.com Pawn Stars, E! Entertainment Clean House, and the BBC The Repair Shop. Rebekah has been an invited guest on radio and video programs for the Antiques Auction Forum, Gemr, Ruby Lane, Auctionata, The Collector's Show, and Harry Rinker's Whatcha Got. She acts as a "˜go-to' resource for industry, auction houses, and the media; her engagements have included Teddy Dorado, Christies, James D. Julia, Morphy Auctions, F.A.O. Schwarz, The Boston Center for Adult Education, The Marin Country Mart, The Metropolitan Waterworks Museum, The Reading Society of Craftsmen, The Strong National Museum of Play, The Questers, R. John Wright, The Boston Globe, Bloomberg, Town and Country, and The Huffington Post, among many others. 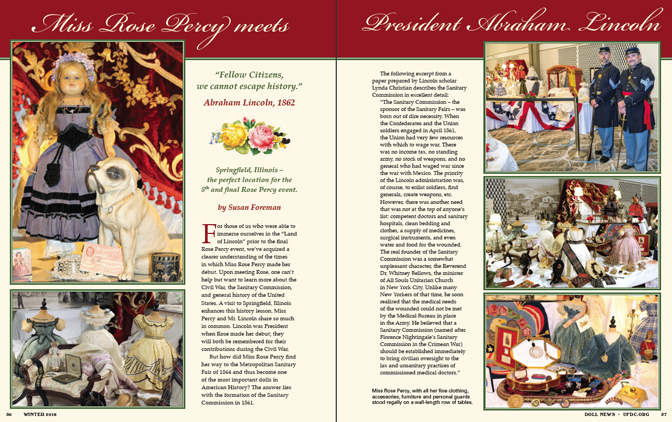 Susan Foreman was born in Los Angeles, California and grew up in Burbank, where her earliest memories are of playing with the now highly-collectible hard plastic Madame Alexander dolls, spending weekends and summers at the family beach house in Balboa.

When Susan was 13 years old, her mother died suddenly. Life changed. Although dolls had held a very special place in Susan's early years, they were now set aside to pursue more practical matters. Susan went on to college, earning an Associate Arts Degree from Pierce College, attending UCLA and eventually receiving a Bachelor's of Science Degree in Business from Woodbury College in Los Angeles.

Susan met Jay Foreman in 1970, and two years later they were married. Not only did they become husband and wife, but business partners as well. Working together, they built their Los Angeles business, House of Clocks (founded by Jay in 1955), to be one of the foremost watch repair shops in the United States, employing up to 55 people at one point. As the business grew, so did Susan's interest in horology. To this day she relishes the challenge of researching the history of a timepiece. In 1990 she and her late husband decided it was time to leave the big city and move to Cambria, a small town on California's central coast. In 1991 they opened Once Upon a Tyme, specializing in watches, clocks and dolls.

During the 1970s, in addition to racing sports and vintage automobiles and taking care of the financial matters of a growing business, Susan's love for dolls was rekindled. In 1975 Susan received a phone call from her father. He had just retrieved two boxes from storage. The boxes were marked "Susan's Dolls." The boxes contained not only her beloved Madame Alexander "Cissy," "Lissy," "Cissette," "Elise," "Alexander-kins," and "Little Genius," but two bisque dolls from the 1890s that had belonged to her grandmother and great aunt. Her childhood love of dolls as playthings evolved into an adult love of collecting.

As a collector, however, the dolls that called to Susan were not those of her childhood, but rather those of her grandmother's day "“ dolls from the 1870s to 1915. French bébés and German character dolls are her favorites. To better understand how antique bisque dolls were made, Susan learned the techniques of porcelain doll making from the casting of the porcelain to the painting of the features and the creating of the costumes. During the 1990s she taught porcelain doll making. In 1995 one of her creations, 15-inch "Alice" depicting Vivian Tobin, the first Alice in Wonderland to star on the American stage in 1915, received "Best of Show" honors at the Mid-State Fair.

She has presented doll collecting programs for a variety of organizations including the 1990 and 2015 UFDC Region 2-S Conferences. She has written articles for such publications as Antique Doll Collector, DOLL NEWS, and the defunct DOLLS magazine. She contributed an article for the UFDC 2014 Convention Souvenir Journal, "Shared Passions."  In addition, she has written numerous horological articles for the National Association of Watch and Clock Collectors including one about collecting and displaying character watches with dolls depicting that character, thus sharing doll collecting with a completely new group of people. In 2011 she published her research about the little known, and previously undocumented, "California Bisque Doll Company." Here findings appeared in Antique Doll Collector magazine. Prior to Susan's research little was known of this company, except for of one short paragraph in the Coleman's Collector's Encyclopedia of Dolls.

Susan currently belongs to two UFDC clubs, California Scenic Coast Doll Club and the Carmel Doll and Toy Study Group. While Susan has numerous interests, dolls continue to be her passion. She says of dolls, "They bring me great joy." 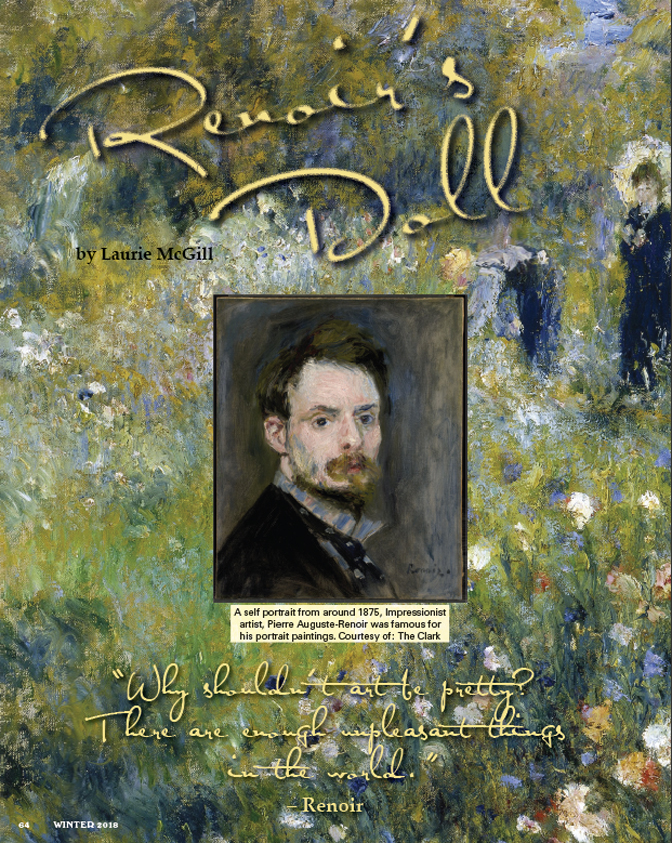 Laurie McGill joined UFDC in 1974 and served as Regional 3 Director (2005-2008). On a local level, Laurie is a member of the Dallas Doll Club, serving as its president (2002-2006 and 2012-2016). She was the associate editor of DOLL NEWS (Winter 2012-Fall 2013) and editor of DOLL NEWS (Winter 2014"“Fall 2015), and she is currently a member of the UFDC Doll Museum's Collections Oversight Committee. Laurie was the 2004 winner of UFDC's Audio Visual contest with her biographic entry, "Once Upon a Time, The Story of the Dixie Doll." She was editor of UFDC's 2013 convention souvenir journal, A Capital Affair. Laurie was honored to receive UFDC's Award of Excellence for Educational Endeavors in 2008 and the Award of Excellence for Contributions to DOLL NEWS in 2014. She is a frequent presenter of seminars and programs at both regional conferences and national conventions. Her love of dolls—and of art—began at an early age when her mother checked a book out of the library for her called "A Gallery of Mothers and Their Children" by Marian King. One page held a picture of Pierre-Auguste Renoir's "La Promenade" (then known as "Mother and Children") depicting a woman with two little girls, one holding a doll. Laurie is thrilled to share the story of Renoir's Doll in the Winter 2018 issue of DOLL NEWS. Today, Laurie is the administrative assistant at the Dallas Museum of Art for the Associate Director of Collections and Exhibitions. 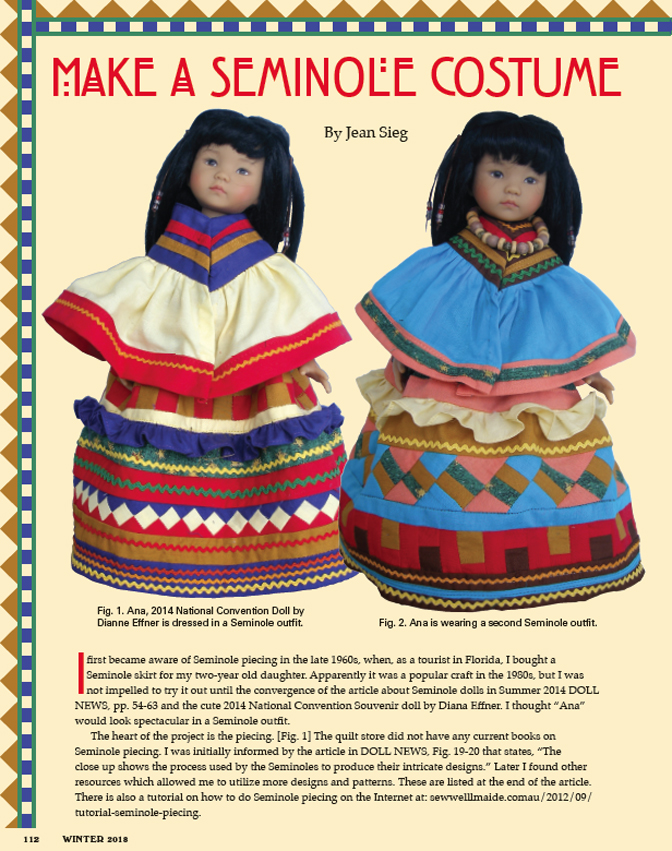 Jeannie Sieg has been a member of UFDC since the 1980s. She has held leadership positions in several clubs and is currently President of San-D-Over Dollers. Jeannie has been producing patterns for both modern and antique doll clothes and accessories for many years. Her patterns have appeared in Doll Reader, Patsy and Friends Newsletter, Doll Costumers Guild Newsletter, and more recently, Doll Castle News. Her article, Doll Shoes and Socks was anthologized in Doll Reader Make and Dress, Vol. II. Jeannie has presented workshops and dialogues at UFDC Regional Conferences as well as UFDC National Conventions. 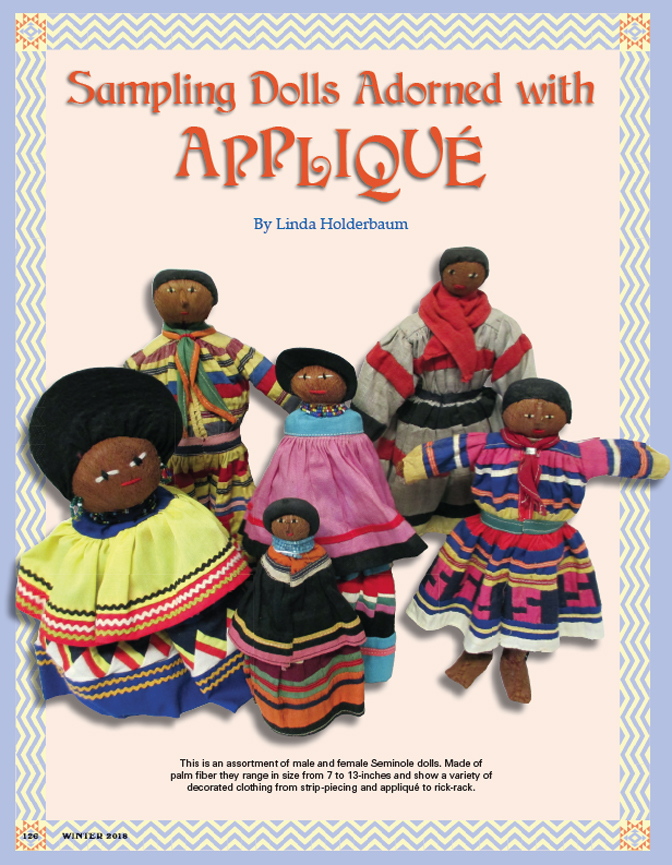 Linda has been a doll collector since the 1960s along with her sister, Rosemary Deal. Her greatest passion has always been ethnic dolls—especially Russian dolls and matryoshkas, though she collects all kinds—with over 7,000 dolls, antique to modern. Linda serves as the executive director of the Art Center of Battle Creek with extensive museum collection background. She is a founding member of the Battle Creek Regional History Museum and consults with other museums in the area. Linda is a long-time member of the Battle Creek Area Doll Club of Michigan. She served as chairperson for the 1988 UFDC "Sojourn to Battle Creek" Region 12 Conference. She was a judge for the Timbertown Dollology Club's Annual Competition for 10 years and for the Fort Wayne Doll Club's Annual Competition for 15 years. She has published more than 75 articles in Antique Doll Collector, Doll Reader, Doll Castle News and DOLL NEWS magazines as well as regional convention journals. During the past year Linda has returned to research and writing articles as a diversion while helping her husband battle cancer. It has been great to be able to share and enjoy her collection anew.

Victoria belongs to three doll clubs in Region 11, and is currently president of the Chesapeake Doll Club of Maryland. Her interests in dolls and art date back to her childhood when she was encouraged by her mother to develop her talents. She created her first paper doll at the age of
twelve and is currently a member of the Original Paper Doll Artists Guild. Her paper dolls have appeared in DOLL NEWS and other national magazines.

Carving wooden dolls is a passion for Victoria. Mainly using bass wood and mahogany, her one-of-a-kind dolls are frequent blue-ribbon winners in UFDC competitive exhibits. Victoria teaches workshops for doll clothing, shoes and accessories, as well as ornaments made from her paper dolls with fabric and trims. A graduate of the University of Pittsburg, Victoria enjoys working in watercolor and watercolor with pen and ink. Her watercolors have been displayed in shows in Baltimore and other locations. She belongs to a local watercolor group and teaches a class for
watercolor techniques.