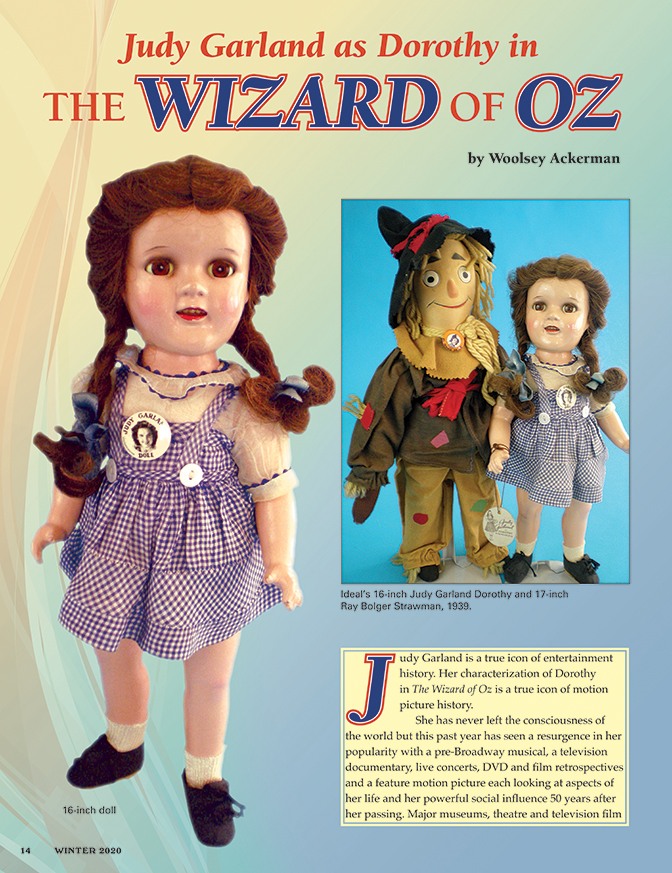 Judy Garland as Dorothy in the Wizard of Oz

Woolsey Ackerman has been influenced by the world of dolls and movies since he was a kid. When his mother inherited her grandmother's collection of dolls that had been acquired while living in Europe in the 1920s the collector bug bit. The family had run an opera house and movie theatre between 1890 and the late 1950s and Woolsey grew up with stories of the old movies and days of touring vaudeville. Discovering at an early age that dolls and toys had been an integral part of the merchandising and publicity of movies since films beginning, he saw a unique way to combine his passions. He has pursued this since, making the history of the movies his lifelong career. Susan, his mother, along with father, Richard, continue the main collection to this day.

As a kid Woolsey saved his money from paper routes and playing church organ to start the movie division of the collection. Billie Nelson Tyrell helped out with her then mail-order business of the best old movie dolls out there! Over the past 30 years some of the finest and most rare of the genre have become a part of the collection. Though sometimes difficult to retain, the collection with its many personalities and characters (including variations and artist creations of those celebrated persons) has been kept intact, telling the history of movie merchandising between 1913 and 1970.

Ackerman came to Los Angeles right out of college and was able to get in on the ground floor when interest in the preservation of film history started. First working for the Director's Guild of America, he got his feet wet in Hollywood and met some of the movies most influential directors. That led to a job at Ted Turner's new company when Ted acquired the great MGM, Warner Brothers, RKO film library. There he became researcher and archivist for the publishing division which produced coffee table books on the movies, including the award winning WHEN THE LION ROARS. That lead to a documentary and then a whole new career working on all aspects of research and production for Turner Classic Movies, producing documentaries, DVD presentations, books , music CDs and the interstitial presentations which the network continues to broadcast to this day. It meant meeting and working with all the legends of old Hollywood too, including some of those personalities represented in the collection of dolls including Shirley Temple, Margaret O'Brien, Jane Withers, Lauren Bacall, Shari Lewis, Sybil Jason, Jackie Cooper, Baby Peggy, and Susan Dey. A stint with fellow collector Barbra Streisand archiving and cataloging her collection of career memorabilia for auction followed along with work in various aspects of film memorabilia, film archiving and film making.

In his various travels in the close-knit Hollywood group of historians he met celebrity photographer Stephen Paley who is working on a photo book of interesting and unique Hollywood characters. He felt that Woolsey and the collection could be an image he might feature in such a project, and thus a panoramic display photo came to be. This photo lead to "America Now" producer and writer Jeff Copeland deciding to do a series of segments for the news show about movie related dolls, the first airing in Oct. 2013. That segment showed the scope of the collection and focused on Shirley Temple and Judy Garland dolls. A future segment will feature a rare Rudolph Valentino doll. These can be viewed today on YouTube.

During the past several years, he has worked closely with Theriault's and the Shirley Temple Black family. First in assisting in the cataloging of her career memorabilia collection that was presented in the LOVE, SHIRLEY TEMPLE touring exhibit, catalog and auction; then in the presentation of several museum exhibitions honoring Temple and utilizing his collection and those of others. This work continues.

He has also served as a go to person in research for the movie related dolls designed by R. John Wright and Robert Tonner.

Woolsey feels that the art of doll collecting should be presented to the general public to promote an understanding and interest in it. Most everyone can relate to the movie genre. Many of us owned a representation of one of our favorite movie characters as a kid. Woolsey plans to continue sharing information about the collection through articles, books, TV shows, exhibits and hopes that one day this genre of doll will be a part of a movie related museum. 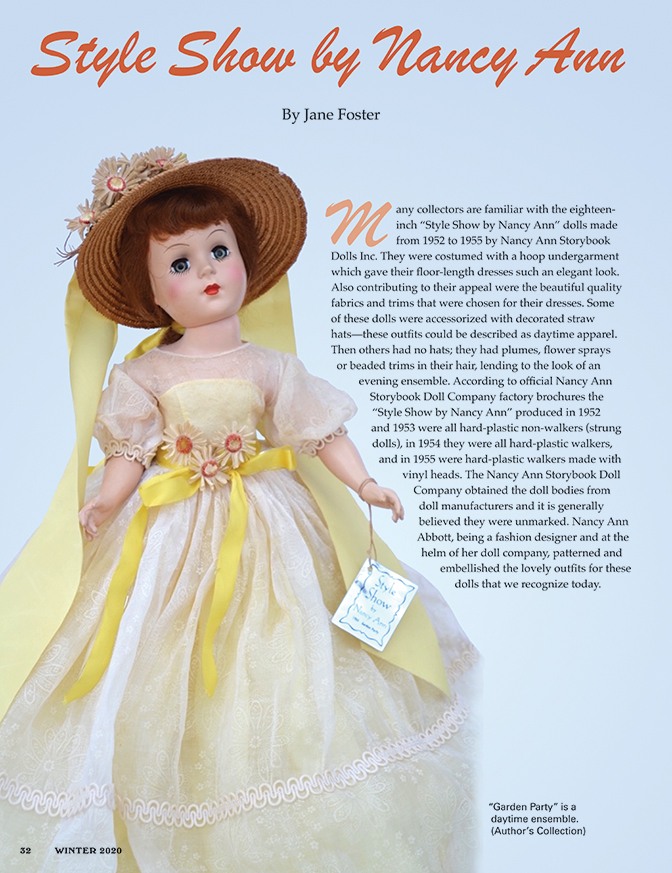 by Nancy Ann by Jane Foster

Jane Foster was an elementary teacher for 38 years. She then enjoyed teaching reading on a part-time basis at the elementary level for five years. She is a member of Randolph Street Baptist Church and the Kanawha Valley Doll Club. Effanbee Patsy dolls, Shirley Temple dolls and memorabilia, and Nancy Ann Style Show dolls comprise most of her collection. Dolls from the decade of the 1950s are of special interest to Jane. She has lived in Hurricane, West Virginia all of her life, currently residing there with her husband. Jane has written articles for Antique Doll Collector, DOLL NEWS and Doll Collector (formerly Contemporary Doll) magazines. Recently Jane had her second children's book published entitled "Dime Store Dolls," which is featured in fall's issue in Reviewing Resources.

Rebekah Kaufman is a third generation, lifelong Steiff enthusiast. Her collection of Steiff items numbers beyond 1,000 and focuses on examples from 1905 onward, including uncataloged rarities and Studio (life-sized) items. Professionally, she is the archivist for Steiff North America, where she leads collector's events, assists with product development initiatives, participates in special projects, and identifies and values vintage Steiff treasures on behalf of the company. She also works for Morphy Auctions of Denver, Pennsylvania, as the Steiff specialist in the Doll and Toy Division and as the company's public relations specialist.

Rebekah is a regular contributor to many publications, including Doll News, Antique Doll Collector, Teddy Bear and Friends, and the Steiff Club Magazine, which has a circulation of over 30,000 and is translated into five languages. Her blog, My SteiffLife, (http://mysteifflife.blogspot.com/) receives thousands of visits per month and focuses on interesting vintage Steiff items, Steiff antiquing adventures, and the history behind older Steiff treasures. Her Steiff book for children, Sassafrass Jones and Her Forever Friends ABCs is available through <Amazon.com>.

Rebekah is the admin on the vintage Steiff Facebook fan page, where she has grown the fan base from 400 to almost 10,000. She is frequently tapped by auction houses and the media for her Steiff expertise; recent engagements include Christie's of London, Teddy Dorado, Theriault's, James D. Julia, FAO Schwarz, The Boston Globe, Bloomberg, The Huffington Post, Town and Country, Harry Rinker's "Whatcha Got," Antique Auction Forum, Gemr, The Collectors Show, MfG-Film (Germany) and the television programs: Inside Edition, Pawn Stars, and Clean House. 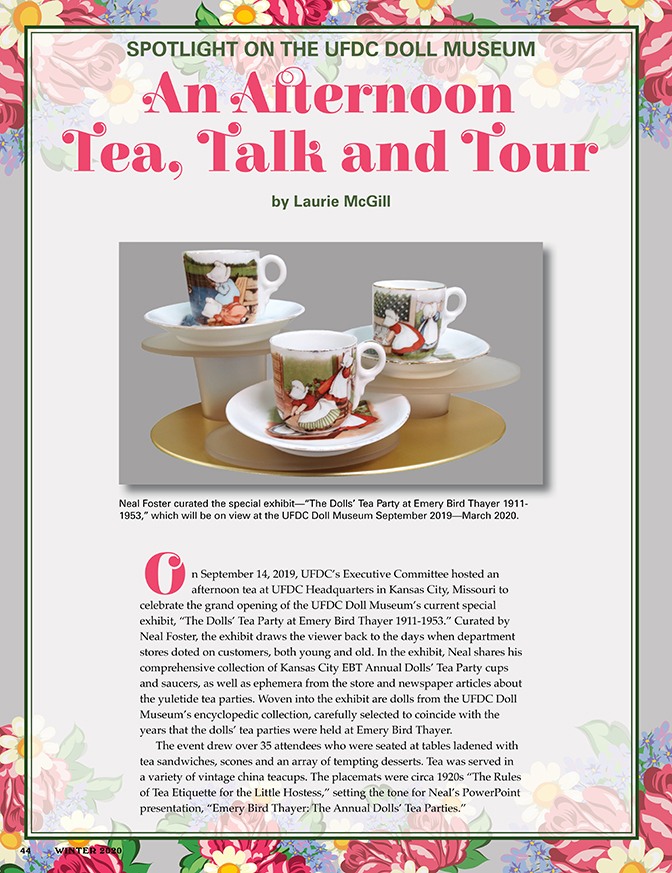 Spotlight at the UFDC Museum: An Afternoon Tea, Talk and Tour

Laurie McGill joined UFDC in 1974 and served as Regional 3 Director (2005-2008). On a local level, Laurie is a member of the Dallas Doll Club, serving as its president (2002-2006 and 2012-2016). She is currently serving as the club's secretary and historian. She was the associate editor of DOLL NEWS (Winter 2012-Fall 2013) and editor of DOLL NEWS (Winter 2014"“Fall 2015). Currently she is a member of the UFDC Doll Museum's Collections Oversight Committee. Laurie was the 2004 winner of UFDC's Audio Visual contest with her biographic entry, "Once Upon a Time—The Story of the Dixie Doll" about twentieth century novelist and early doll collector, Frances Parkinson Keyes. She was editor of UFDC's 2013 convention souvenir journal, A Capital Affair. Laurie was honored to receive UFDC's Award of Excellence for Educational Endeavors in 2008 and the Award of Excellence for Contributions to DOLL NEWS in 2014. She is a frequent presenter of seminars and programs at regional conferences and national conventions, and she continues to research and write articles about dolls and doll-related topics. Laurie has worked at the Dallas Museum of Art since 2006 in the Collections Management Division and the Exhibitions Division. 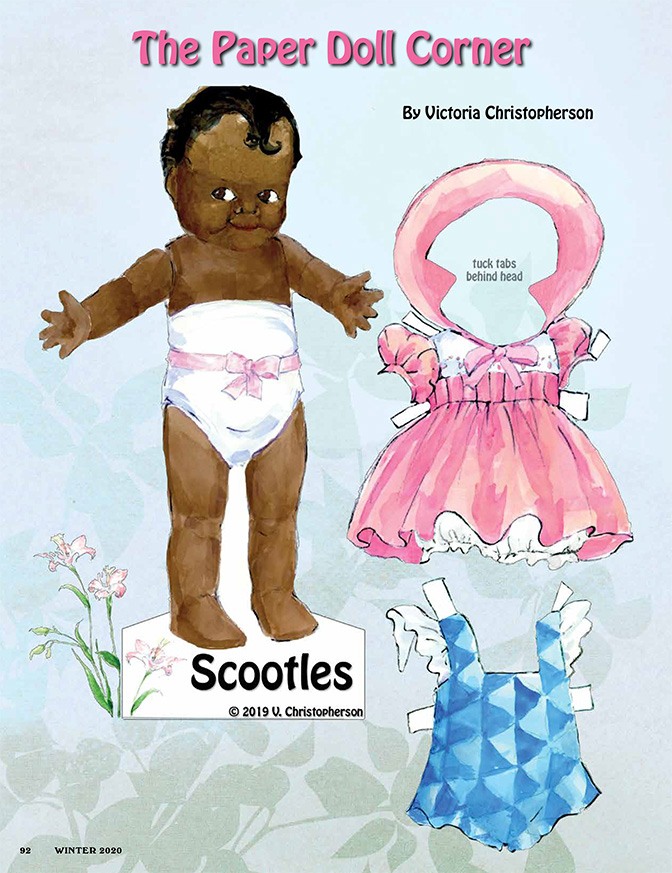 Victoria belongs to three doll clubs in Region 11. She is past president and current vice-president of the Chesapeake Doll Club of Maryland. Her interests in dolls and art date back to her childhood when she was encouraged by her mother to develop her talents. She created her first paper doll at the age of

twelve and is currently a member of the Original Paper Doll Artists Guild. Her paper dolls have appeared in DOLL NEWS and other national magazines.

Carving wooden dolls is a passion for Victoria. Mainly using bass wood and mahogany, her one-of-a-kind dolls are frequent blue-ribbon winners in UFDC competitive exhibits. Victoria teaches workshops for doll clothing, shoes and accessories, as well as ornaments made from her paper dolls with fabric and trims. A graduate of the University of Pittsburg, Victoria enjoys working in watercolor and watercolor with pen and ink. Her watercolors have been displayed in shows in Baltimore and other locations. She belongs to a local watercolor group and teaches a class for watercolor techniques. 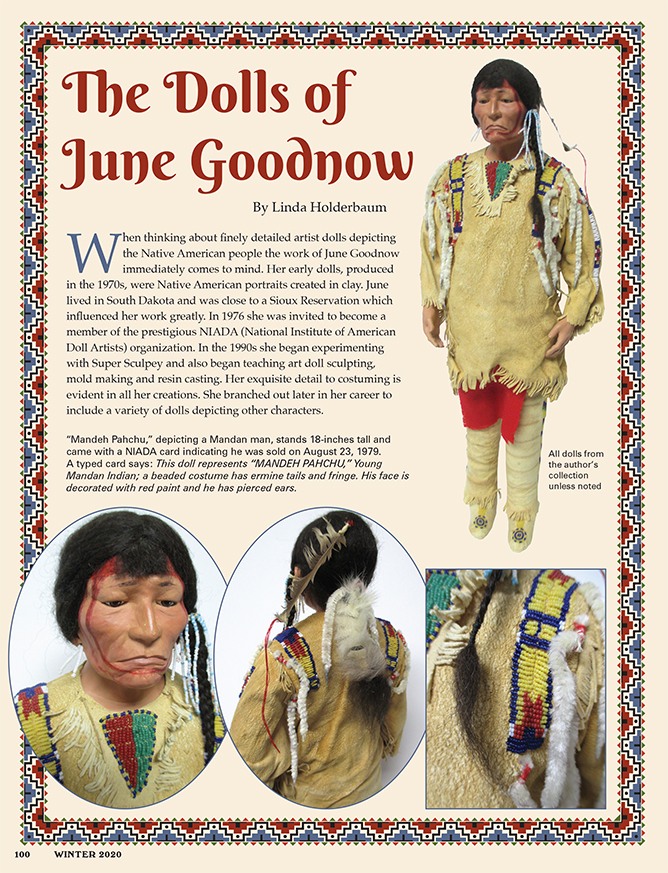 The Dolls of June Goodnow

Linda is the new editor of DOLL NEWS.  She has been collecting dolls since the 1960s. While ethnic dolls have always been her first love, her collection includes antique to modern and everything in between. She is currently the Executive Director of the Art Center of Battle Creek with extensive museum collection background. She was the chairperson of the 1989 UFDC Region 12 Conference in Battle Creek. She was a judge for the Timbertown Dollology Club's annual competition for ten years and for the Fort Wayne Doll Club's annual competition for fifteen years. Linda also writes for Antique Doll Collector's Magazine. 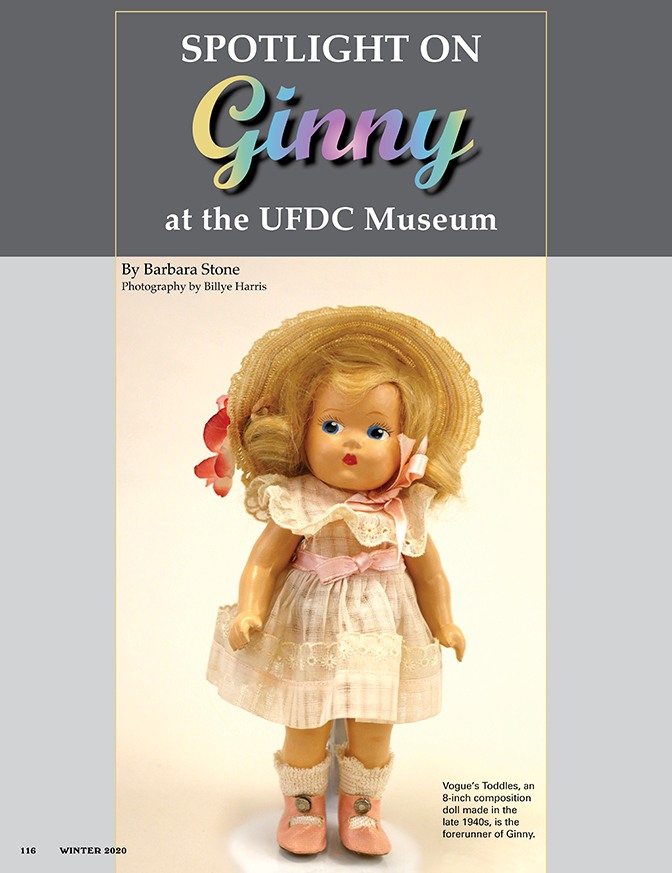 Spotlight on Ginny at the UFDC Museum

Dr Barbara Stone is currently serving as UFDC's President. She has served as Regional Director for UFDC's Region 11. At the local level Barbara is a member of Chesapeake Doll Club of Maryland, Maryland Doll Club and the Dollology Club of Washington, DC.  She has served as president of each of these clubs.

A life-long doll collector, Barbara's collection is focused on Schoenhuts, Vogue Ginny and Rose O'Neill's Scootles. She has presented numerous programs and contributed articles to DOLL NEWS and other doll publications.

Barbara is an engineer has advanced degrees in engineering and a bachelor's degree in business. Prior to her retirement she worked for the Air Force and NASA, where she retired as Director of Plans, Policies and Procedures.  She is an alumni member of Pi Tau Sigma, the International Honor Society for Mechanical Engineers.  Barbara and her husband Jim live in Annapolis, Maryland, along with their cat Cherry. They have two grown children, three grandsons, one granddaughter-in-law. 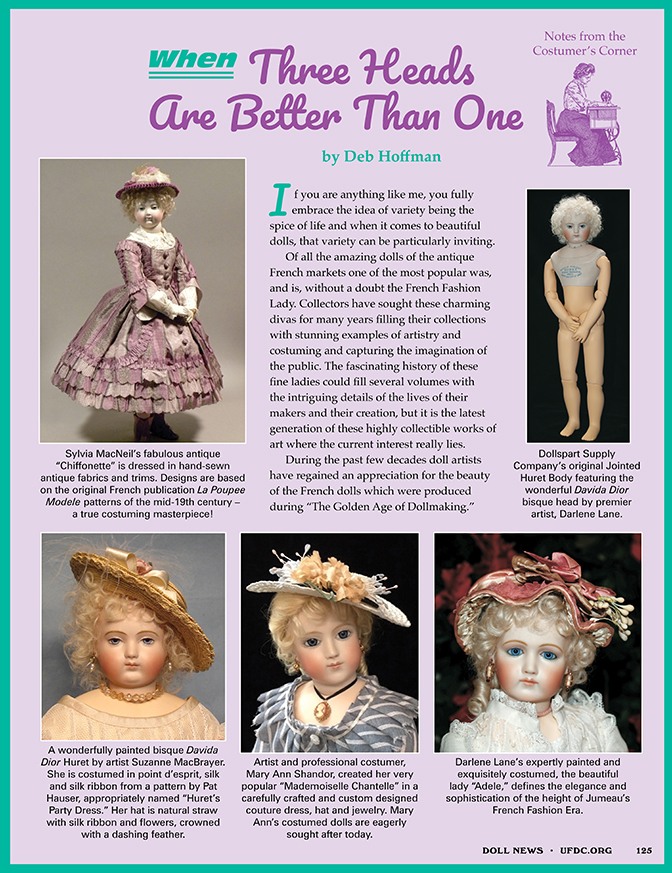 When Three Heads are Better than One

Deb Hoffman is a UFDC member-at-large of 10 years whose doll collections includes both antique and reproduction examples. As a freelance author, she enjoys reading, researching and writing historical-based articles. She has written for Antique Doll Collector magazine and DOLL NEWS. She has also been involved in the co-publication of small self-published circulars such as The French Fashion Doll Revue where she managed research, writing, layout, graphics and production for several years. Deb enjoys the outdoors and lives on "The Continental Divide" in the beautiful Rocky Mountains of Colorado on a small family ranch with her husband and daughter. 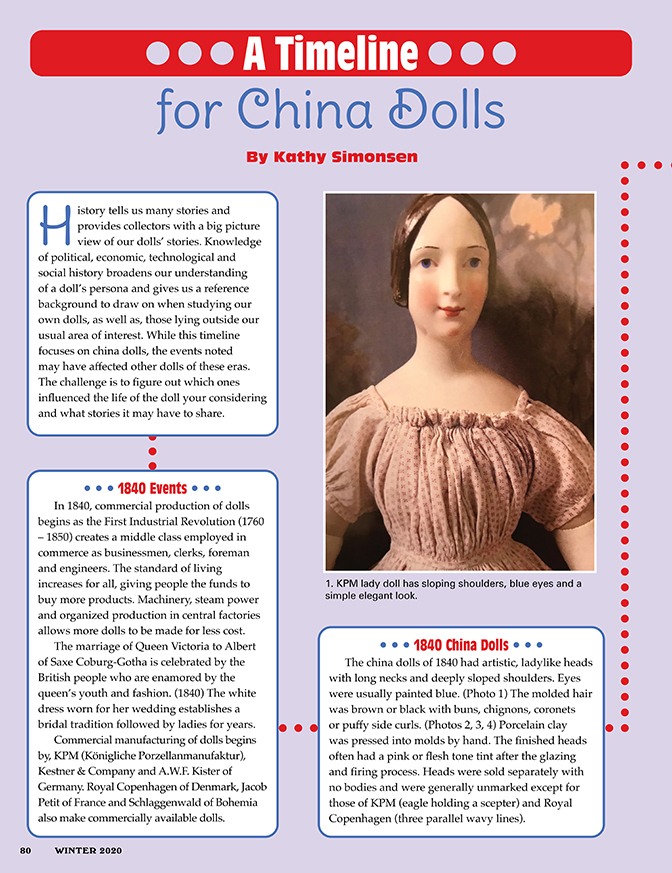 A Timeline for China Dolls 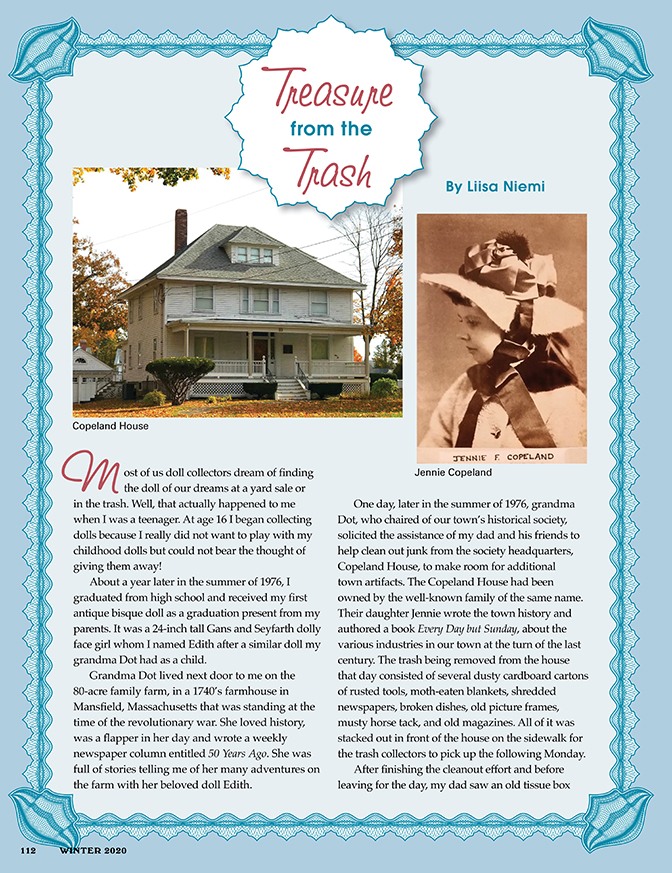 Treasure from the Trash