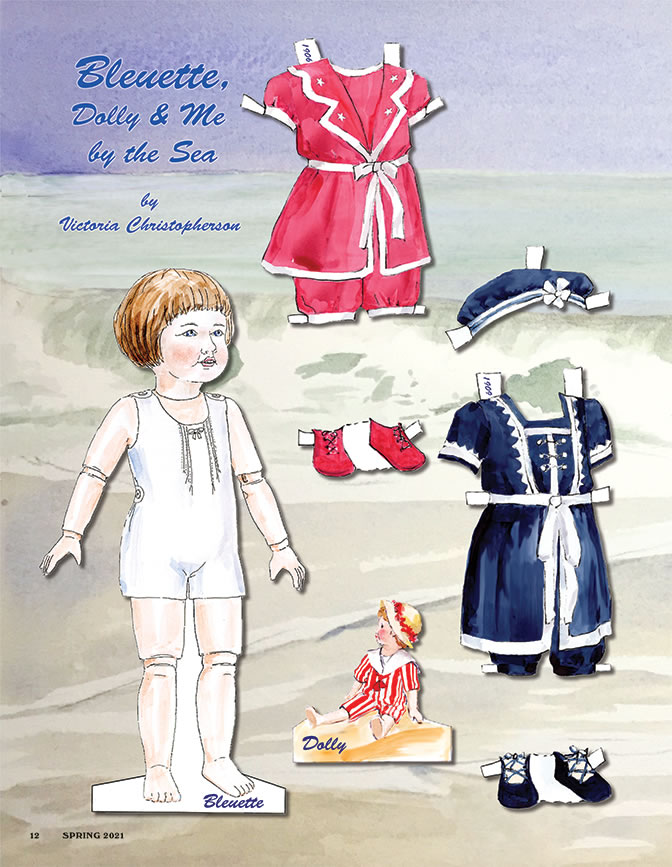 Bleuttee Doll & Me by Victoria Christopherson

Victoria belongs to three doll clubs in Region 11. She is past president and current vice-president of the Chesapeake Doll Club of Maryland. Her interests in dolls and art date back to her childhood when she was encouraged by her mother to develop her talents. She created her first paper doll at the age of twelve and is currently a member of the Original Paper Doll Artists Guild. Her paper dolls have appeared in DOLL NEWS and other national magazines.

Carving wooden dolls is a passion for Victoria. Mainly using bass wood and mahogany, her one-of-a-kind dolls are frequent blue-ribbon winners in UFDC competitive exhibits. Victoria teaches workshops for doll clothing, shoes and accessories, as well as ornaments made from her paper dolls with fabric and trims. A graduate of the University of Pittsburg, Victoria enjoys working in watercolor and watercolor with pen and ink. Her watercolors have been displayed in shows in Baltimore and other locations. She belongs to a local watercolor group and teaches a class for watercolor techniques. 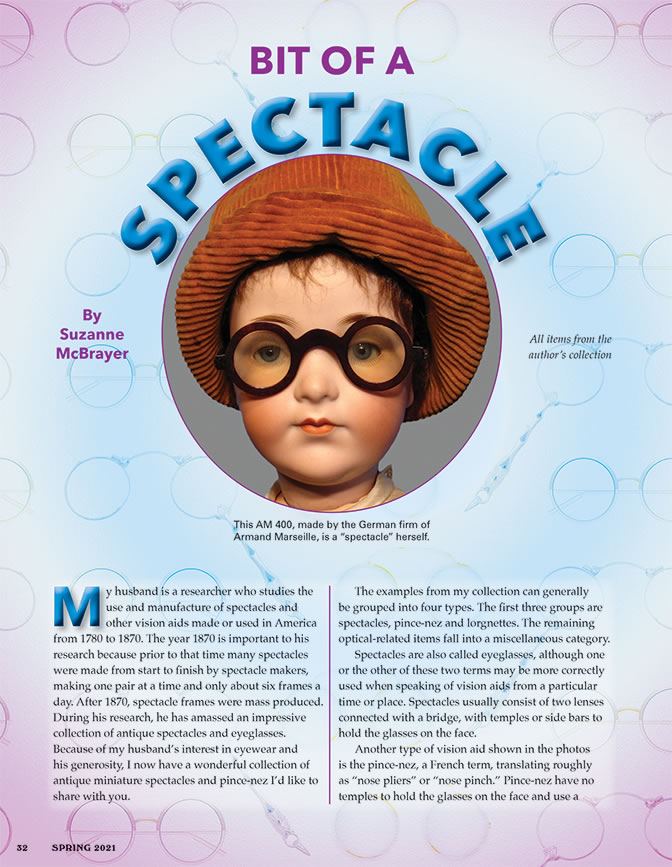 Bit of a Spectacle by Suzanne McBrayer

Suzanne McBrayer, a doll collector for over 50 years, is a well-known antique reproduction doll artist. In 2001, she won the prestigious Millie award--the highest award given by the Doll Artisan Guild for dollmaking. Her dolls have been purchased by collectors around the world. She is a long-time member of UFDC and has completed the apprentice judge program, now serving as a competitive judge for antique dolls. Her website is www.bisquebeauties.com.

Suzanne lives in Charlotte, North Carolina. In addition to her love of dolls, she has a wide range of other interests. In college, she studied piano and voice, winning the North Carolina Metropolitan Opera auditions twice. She has sung as a soloist with the Charlotte Symphony, the North Carolina Symphony, as well as many area churches and theater groups. Along the way, she earned a Master's degree in Business Administration (MBA), passed the CPA exam, and served as a corporate officer for a large regional North Carolina company. 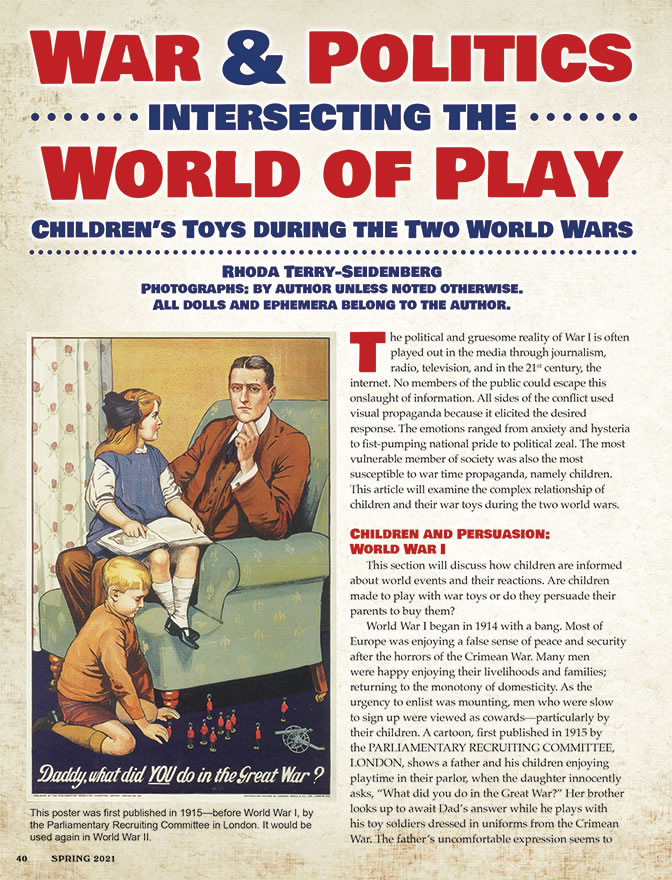 War & Politics Intersecting the World of Play by RhodaTerry - Seidenberg

Rhoda Seidenberg is an Adjunct Professor of Art History in two New York area colleges. She is an avid collector of art dolls, mostly cloth. Her current area of research is art and politics, especially on how dolls and toys are used as propaganda. 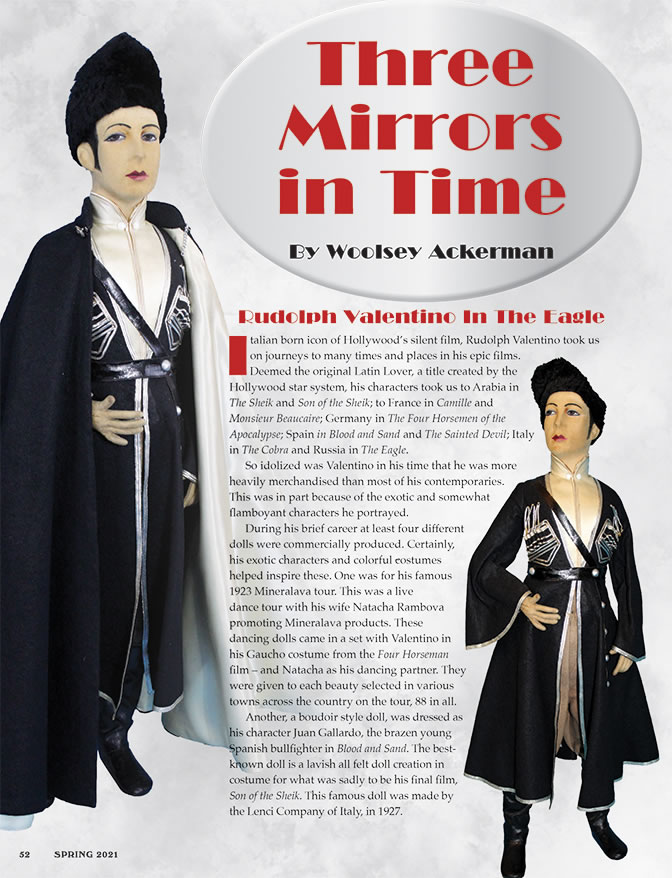 Woolsey Ackerman has been influenced by the world of dolls and movies since he was a kid. When his mother inherited her grandmother's collection of dolls that had been acquired while living in Europe in the 1920s the collector bug bit. The family had run an opera house and movie theatre between 1890 and the late 1950s and Woolsey grew up with stories of the old movies and days of touring vaudeville. Discovering at an early age that dolls and toys had been an integral part of the merchandising and publicity of movies since films beginning, he saw a unique way to combine his passions. He has pursued this since, making the history of the movies his lifelong career. Susan, his mother, along with father, Richard, continue the main collection to this day.

As a kid Woolsey saved his money from paper routes and playing church organ to start the movie division of the collection. Billie Nelson Tyrell helped out with her then mail-order business of the best old movie dolls out there! Over the past 30 years some of the finest and most rare of the genre have become a part of the collection. Though sometimes difficult to retain, the collection with its many personalities and characters (including variations and artist creations of those celebrated persons) has been kept intact, telling the history of movie merchandising between 1913 and 1970.

Ackerman came to Los Angeles right out of college and was able to get in on the ground floor when interest in the preservation of film history started. First working for the Director's Guild of America, he got his feet wet in Hollywood and met some of the movies most influential directors. That led to a job at Ted Turner's new company when Ted acquired the great MGM, Warner Brothers, RKO film library. There he became researcher and archivist for the publishing division which produced coffee table books on the movies, including the award winning WHEN THE LION ROARS. That lead to a documentary and then a whole new career working on all aspects of research and production for Turner Classic Movies, producing documentaries, DVD presentations, books , music CDs and the interstitial presentations which the network continues to broadcast to this day. It meant meeting and working with all the legends of old Hollywood too, including some of those personalities represented in the collection of dolls including Shirley Temple, Margaret O'Brien, Jane Withers, Lauren Bacall, Shari Lewis, Sybil Jason, Jackie Cooper, Baby Peggy, and Susan Dey. A stint with fellow collector Barbra Streisand archiving and cataloging her collection of career memorabilia for auction followed along with work in various aspects of film memorabilia, film archiving and film making.

In his various travels in the close-knit Hollywood group of historians he met celebrity photographer Stephen Paley who is working on a photo book of interesting and unique Hollywood characters. He felt that Woolsey and the collection could be an image he might feature in such a project, and thus a panoramic display photo came to be. This photo lead to "America Now" producer and writer Jeff Copeland deciding to do a series of segments for the news show about movie related dolls, the first airing in Oct. 2013. That segment showed the scope of the collection and focused on Shirley Temple and Judy Garland dolls. A future segment will feature a rare Rudolph Valentino doll. These can be viewed today on YouTube.

During the past several years, he has worked closely with Theriault's and the Shirley Temple Black family. First in assisting in the cataloging of her career memorabilia collection that was presented in the LOVE, SHIRLEY TEMPLE touring exhibit, catalog and auction; then in the presentation of several museum exhibitions honoring Temple and utilizing his collection and those of others. This work continues. He has also served as a go to person in research for the movie related dolls designed by R. John Wright and Robert Tonner.

Woolsey feels that the art of doll collecting should be presented to the general public to promote an understanding and interest in it. Most everyone can relate to the movie genre. Many of us owned a representation of one of our favorite movie characters as a kid. Woolsey plans to continue sharing information about the collection through articles, books, TV shows, exhibits and hopes that one day this genre of doll will be a part of a movie related museum.

A Passion for Black Bride Dolls by Jacqueline Harpp

Jacqueline is a retired federal government management analyst who conducted audits, summarized findings in reports, and recommended program improvements to Congress for nearly 38 years. Although currently residing in Georgia, Jacqueline is still a member of UFDC and the Maryland Society of Doll Collectors (MSDC) in Region 11 for over 10 years. Jacqueline served as President of MSDC (September 2013-May 2016) and has fulfilled duties as chair of the club's nominations committee in 2016. She has also summarized and reported to DOLL NEWS highlights of MSDC luncheons such as, The Dolls of Revelry (2014), Old Fashioned Social (2016), and A Parisian Afternoon with Bleuette (2018), The club's Wonderland (2020) luncheon was cancelled due to COVID-19 Pandemic virus. Jacqueline has several hundred African American dolls that include Daddy's Long Legs, Barbies, and some renowned doll artists that specialize in producing African American dolls, some of which were mentioned in this article. 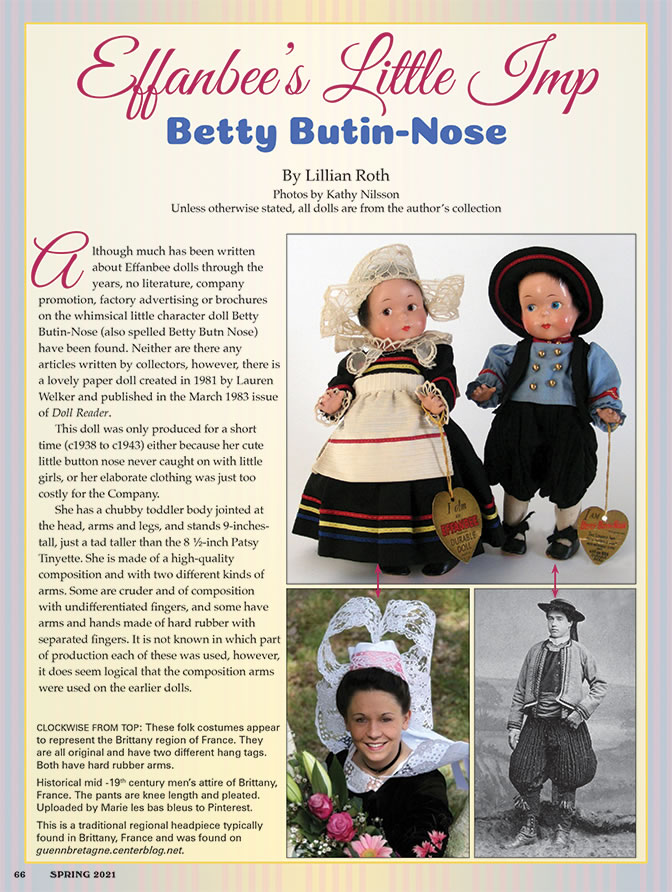 Lillian has been a collector of Effanbee Betty Butin-Nose dolls for about 25 years and also a collector of Nancy Ann Muffie and Debbie dolls for 40 plus years. She has co-written a series of self-published books on the Muffie doll known as "The Muffie Puzzle" books, the last, and most comprehensive, being "The Muffie Puzzle Almost Solved." She contributed chapters to "The Encyclopedia of Nancy Ann Dolls" published by Collector Books in 2009 and is a member-at-large of UFDC. 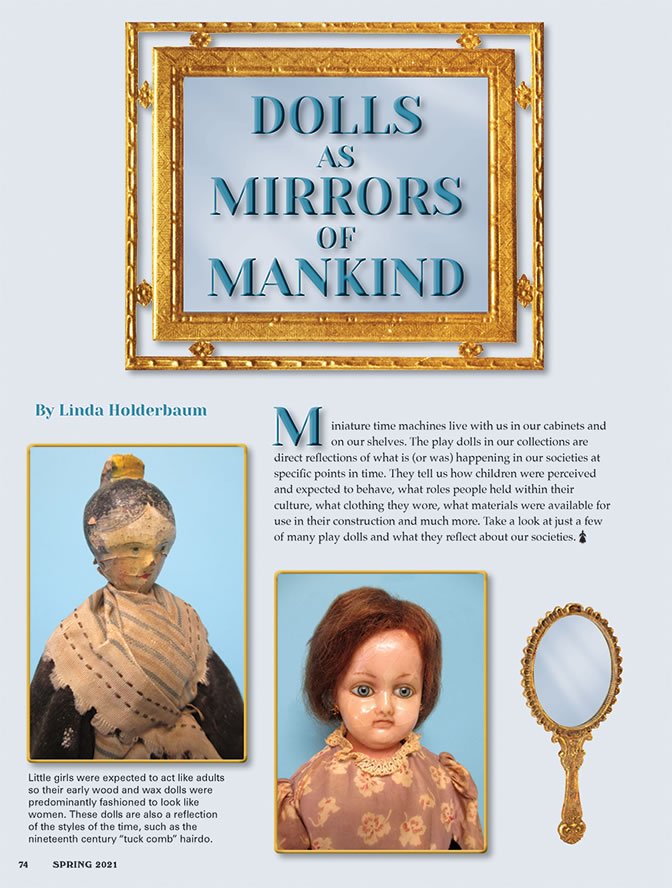 Linda is the editor of DOLL NEWS. She has been collecting dolls since the 1960s. While ethnic dolls have always been her first love, her collection of over 10,000 dolls includes antique to modern and everything in between. Her first book, The Other Russian Doll: Antique Bisque to 1980s Plastic, was published in 2019. She is currently the Executive Director of the Art Center of Battle Creek with extensive museum collection background. She was the chairperson of the 1989 UFDC Region 12 Conference in Battle Creek. She was a judge for the Timbertown Dollology Club's annual competition for ten years and for the Fort Wayne Doll Club's annual competition for fifteen years. Linda has written numerous articles for Doll Reader, Doll Castle News and Antique Doll Collector Magazine. 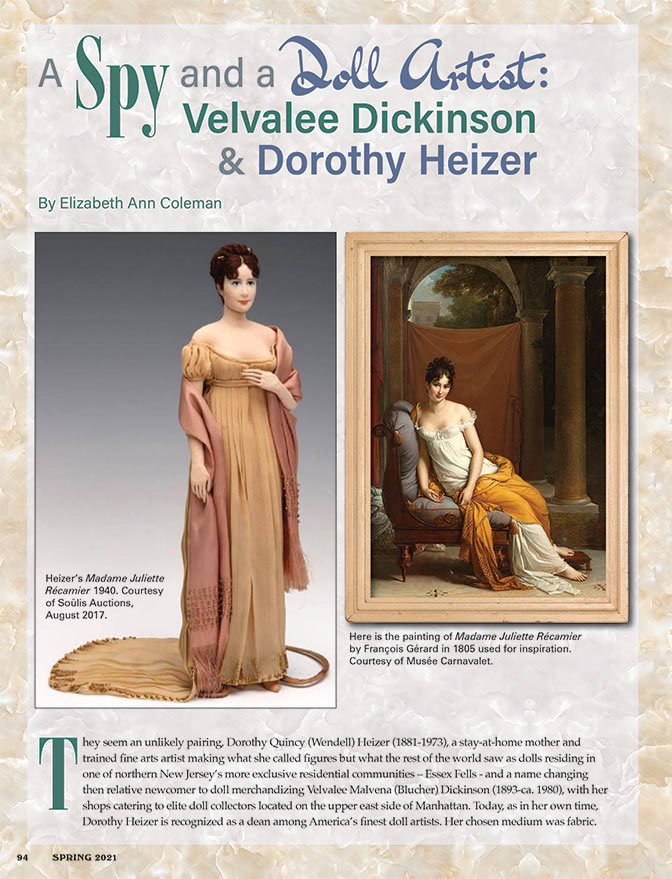 The author is a retired costume and textile curator having worked with major American museum collections in Newark, New Jersey; Brooklyn, New York; Houston, Texas and Boston, Massachusetts. Parallel to her museum work has been a decades-long interest in dolls. She has published widely in both fields and continues to work as a consultant, lecturer and researcher in the above mentioned fields. 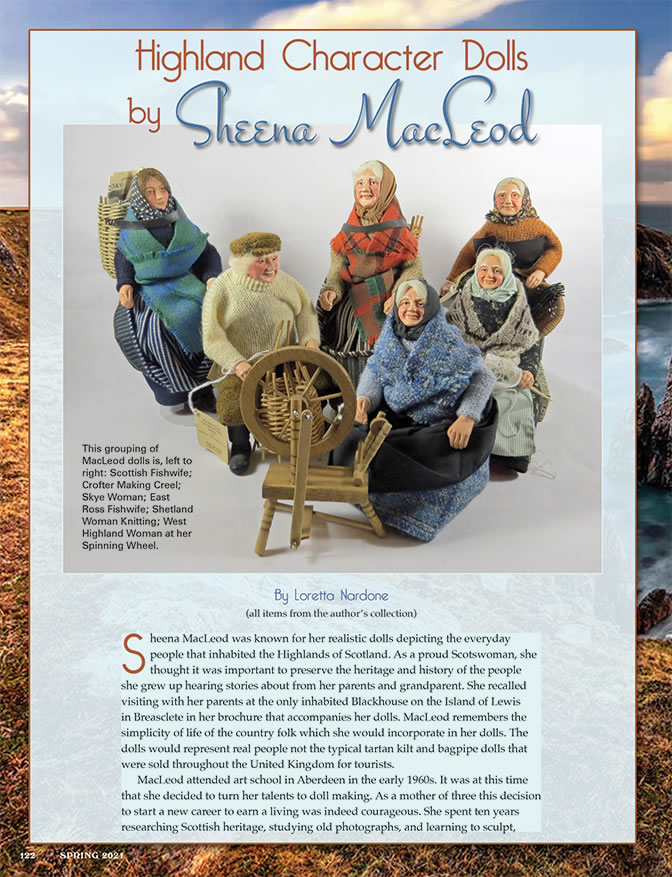 Loretta Nardone was born in Brooklyn, New York. She earned a Bachelor of Arts in Education degree at Pace University and a Master's degree at Long Island University. She also holds a certificate in Appraisal Studies from New York University. She is a retired New York City teacher.

A life-long doll collector, she has been a member of UFDC since 1979. She is the Past President of UFDC (2017-2019) and Past Region 14 Director (1994-1997). She has served as Classroom Educator (2001-2005). She has attended 38 conventions and served as Convention Chair in San Antonio and Kansas City. Loretta has written articles for magazines, organized exhibits, presented seminars and lectures on international dolls, cloth dolls and artists' doll. She is the author of a book on Zuni Beaded dolls. She was invited to participate in an educational conference at the United Nations focusing on using dolls to teach tolerance and multiculturalism.

Loretta is a recipient of the New York City Newsday Teacher of the Year award. She was awarded grants for her educational doll program and was the first teacher to be granted a year-long sabbatical to create a teaching learning kit on using dolls in the classroom. She was honored by UFDC with the Award of Excellence for Educational and Philanthropic Endeavors through Dolls in 1994.

Today Loretta resides in Florida and is a member of the Gold Coast Doll Study Club and the South Florida Doll Study Club. She is also a member of National Doll and Toy Collector's Club. She continues to enjoy her interest in ethnic and cloth dolls and sharing her knowledge with doll enthusiasts. Loretta has recently established a production company, Treasured Memories Productions, to produce digital doll presentations. She hopes to continue to write articles for DOLL NEWS that reflect the diversity of our hobby.