Gone with the Wind "“ the novel, the movie, the dolls by Laurie McGill

Laurie McGill joined UFDC in 1974 and served as Regional 3 Director (2005-2008). On a local level, Laurie is a member of the Dallas Doll Club, serving as its president (2002-2006 and 2012-2016). She is currently serving as the club's secretary and historian. She was the associate editor of DOLL NEWS (Winter 2012-Fall 2013) and editor of DOLL NEWS (Winter 2014"“Fall 2015). Currently she is a member of the UFDC Doll Museum's Collections Oversight Committee. Laurie was the 2004 winner of UFDC's Audio Visual contest with her biographic entry, "Once Upon a Time—The Story of the Dixie Doll" about twentieth century novelist and early doll collector, Frances Parkinson Keyes. She was editor of UFDC's 2013 convention souvenir journal, A Capital Affair. Laurie was honored to receive UFDC's Award of Excellence for Educational Endeavors in 2008 and the Award of Excellence for Contributions to DOLL NEWS in 2014. She is a frequent presenter of seminars and programs at regional conferences and national conventions, and she continues to research and write articles about dolls and doll-related topics. Laurie has worked at the Dallas Museum of Art since 2006 in the Collections Management Division and the Exhibitions Division. 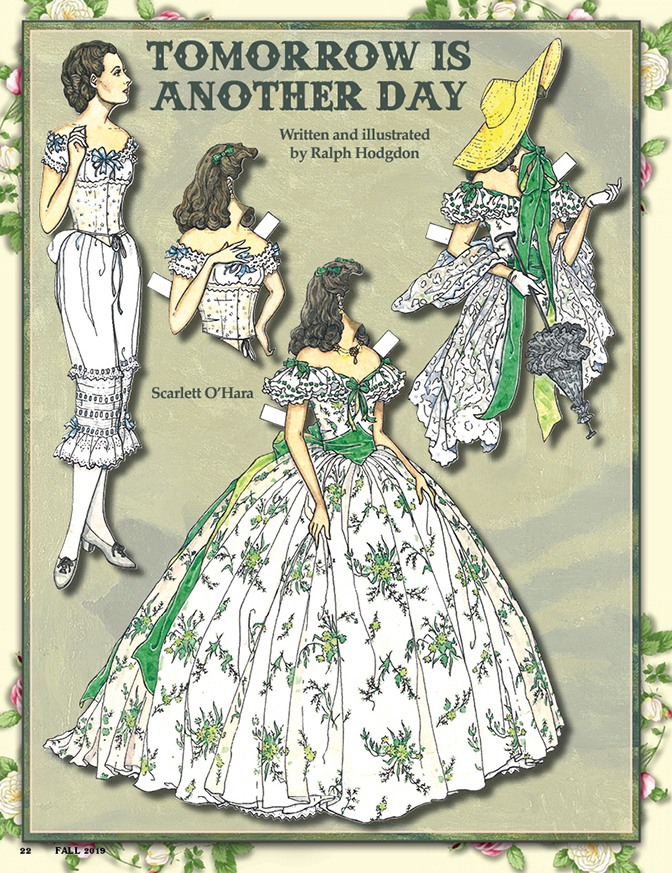 Tomorrow is Another Day Paper Doll by Ralph Hodgdon

Ralph Hodgdon started drawing at a very young age. As a free-lance artist, he illustrated sheet music covers and posters before landing a job at Kenneth McKellers Art Service in Massachusetts. The deadline-oriented work lasted five years, before he returned to free-lance work. In 1973, Ralph did his first paper doll in black and white "“ a Scarlett with all the Walter Plunkett-designed clothing, that launched his paper doll career. Ralph shared a personal friendship with Walter Plunkett and wrote an "˜up close and personal' article about the famous costume designer in the 2010 Paper Doll Review, Issue 47. Ralph has twice won a Massachusetts statewide greeting card contest for the official state Christmas card. He considers his most important achievement as having his work in the drawing and print collection of the Museum of Fine Arts in Boston, Massachusetts, where he currently resides. 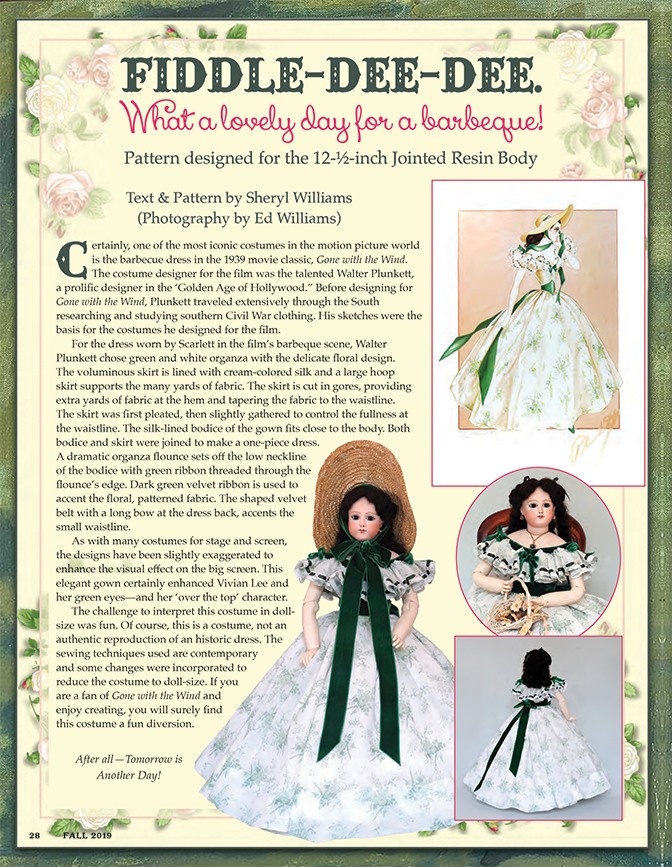 Sheryl has collected antique bisque dolls for over 39 years. She is a well-known doll artist, specializing in antique reproduction dolls and doll costuming. She has published extensively in The Doll Artisan Magazine, Dolls Beautiful Magazine, DOLL NEWS and The Doll Costume Quarterly Magazine. An avid researcher, Sheryl finds that authentic costuming of antique and reproduction of porcelain dolls is her passion. A firm believer in education, she travels extensively teaching seminars for the Doll Artisan Guild, as well as various porcelain doll making and costuming seminars. A frequent lecturer at doll events worldwide, Sheryl has presented doll costuming seminars at UFDC National Conventions that included Ribbon Art, Pattern Design and most recently, the Study and Sewing Techniques used in Antique Doll Clothing. Collaborating with Susan Sirkis, these seminars have resulted in the production of a series of DVDs called Seminars on the Go. Sheryl has also been involved in presenting instructional You Tube videos with the Grovian Doll Museum and Ruby Lane.

Sheryl is a Doll Artisan Guild traveling Instructor, Director of Competition for the Doll Artisan Guild, a competition judge for UFDC, Doctor of Dollmaking and Contributing Editor/Supplements for DOLL NEWS Magazine. She lives in Elmira, New York with her husband and two very busy Savannah cats. She loves to travel, teach and is frequently on the go. 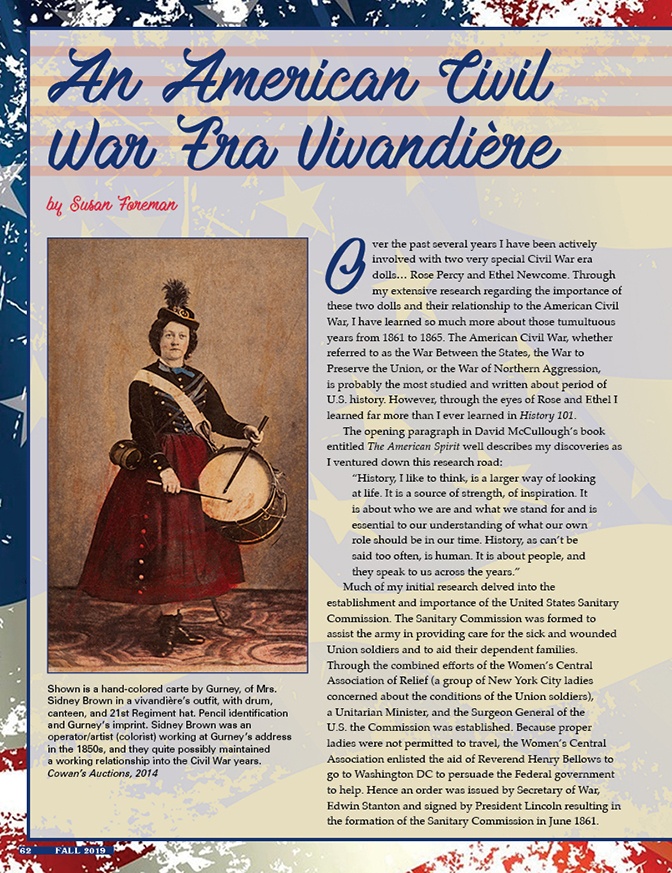 Susan was born in Los Angeles, California and grew up in Burbank, where her earliest doll memories include hard plastic Madame Alexander dolls. At age thirteen, her mother died suddenly, and life changed. After storing her dolls away, Susan attended UCLA, earned an Associate Arts Degree from Pierce and eventually received a BS Degree in Business from Woodbury College in Los Angeles. Later, she and husband Jay built their business, House of Clocks, to be one of the foremost watch repair shops in the United States. During the 1970s, in addition to racing cars, Susan's love for dolls was rekindled. In 1975, Susan was reunited with her beloved Madame Alexander Cissy, Lissy, Cissette, Elise, Alexander-kins, and Little Genius, as well as two of her family's antique bisque dolls. In 1990 she and her late husband decided it was time to move to Cambria, a small town on California's central coast. In 1991 they opened "Once Upon a Tyme," specializing in watches, clocks, and dolls. During the 1990s Susan taught porcelain doll making and in 1995 one of her creations received Best of Show honors at the Mid-State Fair.

Susan has presented programs for a variety of organizations including the 1990 and 2015 UFDC Region 2S Conferences. She has written articles for such publications as Antique Doll Collector, DOLL NEWS, and Dolls Magazine, and contributed articles for the 2014, 2017, and 2019 UFDC Convention souvenir journals. In addition, she has written numerous horological articles for the National Association of Watch and Clock Collectors, including one about collecting and displaying character watches with dolls depicting that character, bridging the doll community. In 2011 Susan published her research on the little known, and previously undocumented, California Bisque Doll Company, with her findings appearing in Antique Doll Collector magazine. Prior to Susan's research little was known of this company, except for one short paragraph in the Coleman's Encyclopedia of Dolls. Susan currently belongs to two UFDC clubs, California Scenic Coast Doll Club and the Carmel Doll and Toy Study Group. While she has numerous interests, dolls continue to be her passion. "They bring me great joy," she says. 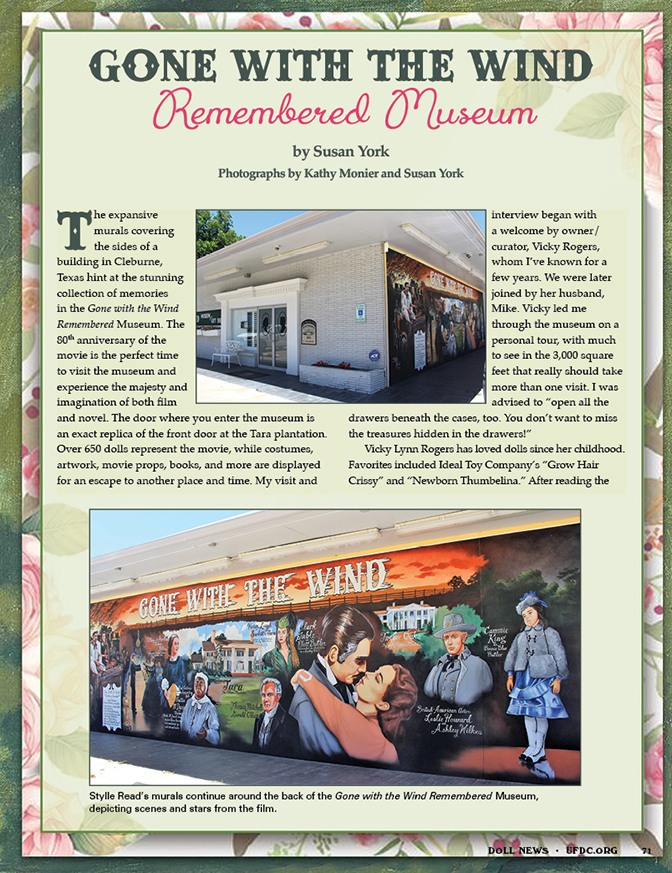 Gone with the Wind Remembered Museum by Susan York

Susan York has been a member of UFDC since 1985. She has also been a member of the Madame Alexander Doll Club since 1986 and a Charter Member of the Metroplex Doll Club in Arlington, Texas, established in 1985. Over the years, she has met some of her best friends through doll collecting. This fall, Susan will serve as Chairman of the "Madame Alexander Fall Friendship Luncheon" at the Gone with the Wind Gathering and Guest House, in Cleburne, Texas. Her doll club, the Metroplex Doll Club, is sponsoring the luncheon and it will be Susan's fourth luncheon of its kind that she has chaired. Susan was born in Trenton, New Jersey. Her father co-owned Bordentown Military Institute, a boy's military prep school. At a young age, she lost her father and shortly after, she moved back to her mother's home state of Texas, settling in Fort Worth. Susan graduated from Baylor University (as did most of her family) with a B.S. degree, and is a member of Kappa Kappa Gamma. She collects many types of dolls, but mainly vintage Madame Alexanders, Vogue Ginnys, and Barbies, as well as modern dolls including R. John Wright, Maggie Iacono, Robert Tonner, among others. Besides collecting dolls, Susan loves to travel. She has attended many doll conventions "“ UFDC, Madame Alexander, Modern Doll, and Barbie "“ and has traveled over the years Internationally and domestically, to nearly every state in the United States where doll conventions have taken her to. Susan has been an energy broker in the state of Texas for 15 years. She and husband Mark celebrated their 41st anniversary this year. They are blessed with two children and three grandchildren. 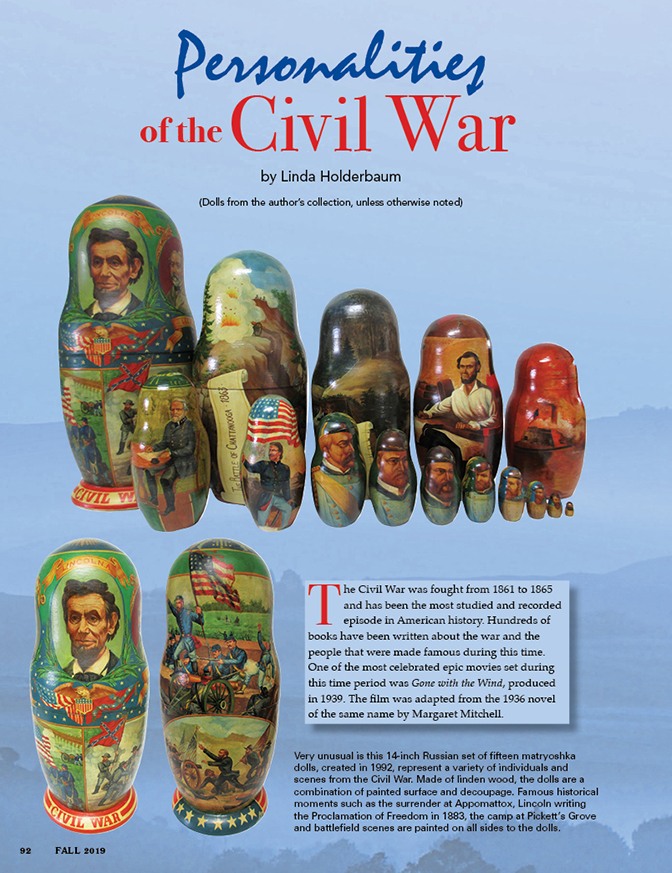 Personalities of the Civil War by Linda Holderbaum

Linda has been collecting dolls since the 1960s. While ethnic dolls have always been her first love, her collection includes antique to modern and everything in between. She is currently the Executive Director of the Art Center of Battle Creek with extensive museum collection background. She was the chairperson of the 1989 UFDC Region 12 Conference in Battle Creek. She was a judge for the Timbertown Dollology Club's annual competition for ten years and for the Fort Wayne Doll Club's annual competition for fifteen years. Linda also writes for Antique Doll Collector's Magazine. 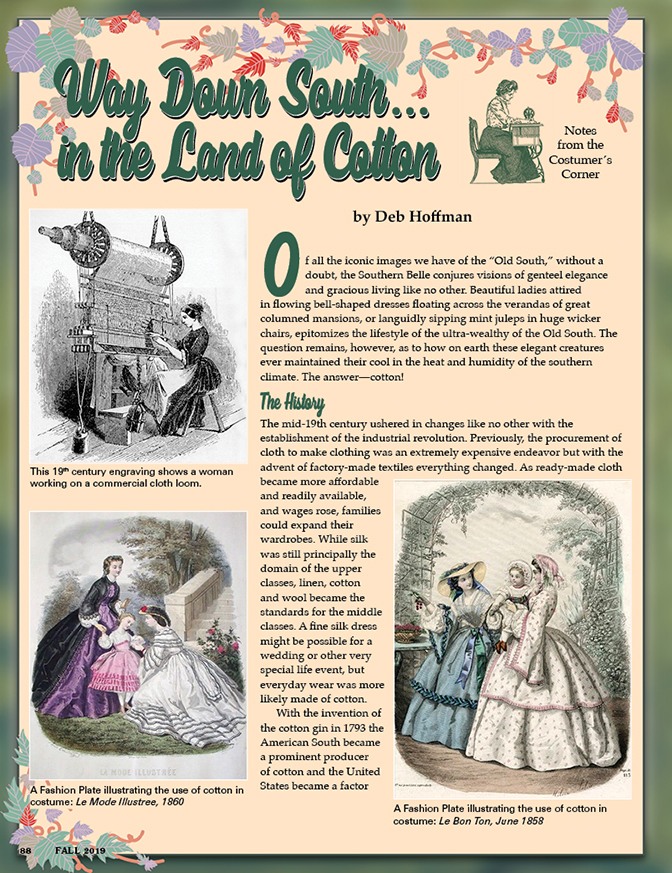 Way Down South..in the Land of Cotton by Deb Hoffman

Deb Hoffman is a UFDC member-at-large of 10 years whose doll collections includes both antique and reproduction examples. As a freelance author, she enjoys reading, researching and writing historical-based articles. She has written for Antique Doll Collector magazine and DOLL NEWS. She has also been involved in the co-publication of small self-published circulars such as The French Fashion Doll Revue where she managed research, writing, layout, graphics and production for several years. Deb enjoys the outdoors and lives on "The Continental Divide" in the beautiful Rocky Mountains of Colorado on a small family ranch with her husband and daughter.

The Artistry of Pat Moulton"“Making Waves by Kathy Monier

Kathy Monier is an active member of the Fort Worth Antique Doll Club and President of the Dallas Doll Club. She has served as Region 3 Director 2011-2014, Convention Event Coordinator 2013-2015 and as Editor of UFDC's 2017 Convention Souvenir Journal and Editor of UFDC's DOLL NEWS magazine. Kathy has been an avid artist, seamstress and doll collector for most of her life. Included in her original artwork are black and white graphite drawings and color pencil portraits of her favorite antique and vintage dolls, as well as original paper dolls. She is very passionate about sewing and doll costuming. Her doll collection includes antique, vintage and modern dolls. Retired from a corporate Human Resources background, she uses her acquired skills today to arrange and present programs, lectures and workshops. Kathy lives in Colleyville, Texas with husband Mike and "Buddy," the cat. 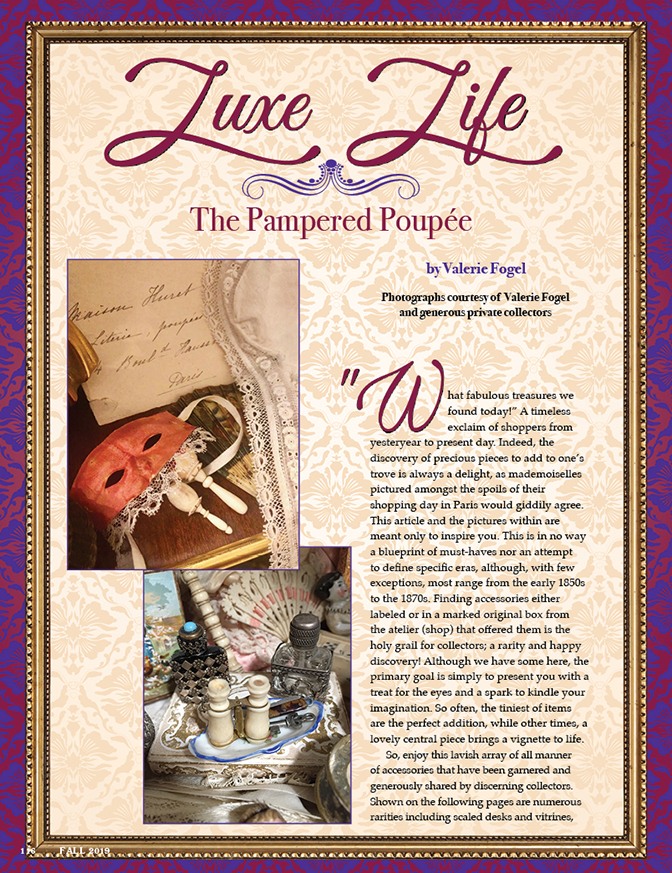 Valerie's love for beautiful and historical things began as a child growing up in France and Spain. Her father was a naval officer on the USS Springfield in the south of France when she was nine years old. The family often followed the ship to his many ports of call and Valerie was frequently gifted with a doll from distant ports. Along the way, she made the acquaintance of a great- great-great granddaughter of Josephine de Beauharnais "“ a gracious woman in her eighties in residence on the entire lower floor of the beautiful repurposed mansion that Valerie and her family lived in. Their friendship fueled Valerie's love for all things "˜early French,' during which time she was exposed to antique dolls. At the age of fourteen, Valerie returned to the United States and studied art history. Later in life, she began to collect antique dolls, which became a passionate pursuit. Years later, in 2002, she began her career as a dealer of antique dolls, known as Beautiful Bébés Antique Dolls, which has afforded her a unique perspective of discovering, studying and handling incredibly beautiful and rare dolls of the past. Valerie stays busy between global venues and shows, presentations and lectures. She shares her amazing life with her life-long partner on the Snoqualmie River in the state of Washington, with their wonderful dogs, priceless friends and incredible family. 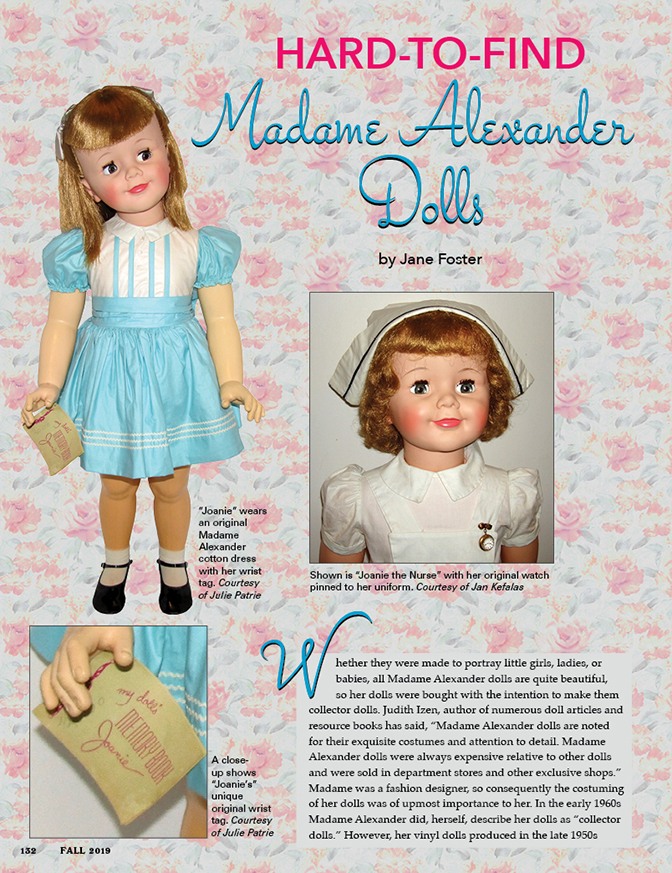 Jane Foster was an elementary teacher for 38 years. She then enjoyed teaching reading on a part-time basis at the elementary level for five years. She is a member of Randolph Street Baptist Church and the Kanawha Valley Doll Club. Effanbee Patsy dolls, Shirley Temple dolls and memorabilia, and Nancy Ann Style Show dolls comprise most of her collection. Dolls from the decade of the 1950s are of special interest to Jane. She has lived in Hurricane, West Virginia all of her life, currently residing there with her husband. Jane has written articles for Antique Doll Collector, DOLL NEWS and Doll Collector (formerly Contemporary Doll) magazines. Recently Jane had her second children's book published entitled "Dime Store Dolls," which is featured in fall's issue in Reviewing Resources.