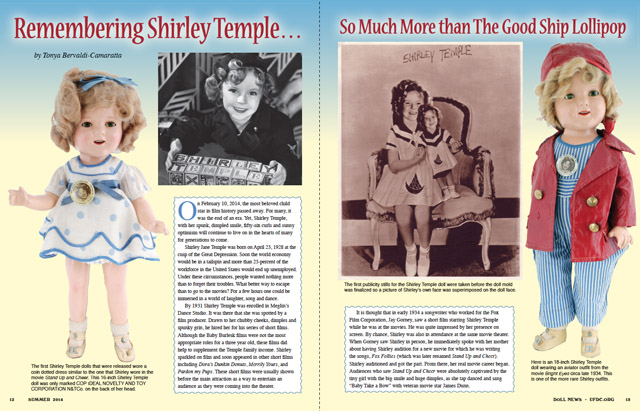 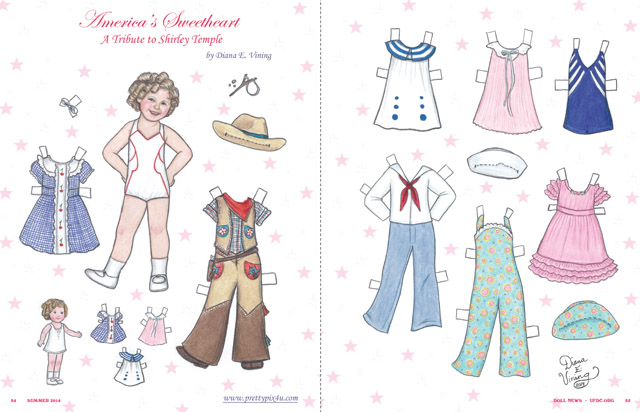 America's Sweetheart "“ A Tribute to Shirley Temple Paper Doll by Diana E. Vining "America's Sweetheart" is a special tribute to Shirley Temple, created by doll /paper doll artist Diana E. Vining, to share with our UFDC family.   An enthusiastic UFDC member and avid Shirley Temple fan, she has attempted to capture just a glimmer of the light that Shirley brought to our world.   The clothing and accessories included with this paper doll have been recreated from actual outfits that Shirley wore as a child, both on screen, and at home.   Only the polka dot pattern on the romper and hat set was imagined by the artist. Diana's paper dolls and other artwork are published in various doll collector magazines and newspapers, and are sold at collector shows and doll shops. They are also delightful guests at various luncheons and conventions as souvenirs and table favors.   She conceptualized and designed Vogue Doll Company's "Ginny Greetings" series, which features Ginny dolls for special occasions with matching doll-themed greeting cards.     She also produces one of a kind beautiful and incredibly realistic reborn baby dolls. Diana Vining's paper dolls, magnets, greeting cards, and other items can be found on her website, www.prettypix4u.com.   She specializes in custom orders, from portrait paper dolls to personalized doll-themed favors for special events.   If you or your doll club are looking for a special souvenir for your next event, you can visit her website, email her at: prettypix4u@yahoo.com, or write to her at: Diana E. Vining P.O. Box 667 Hackettstown, NJ 07840 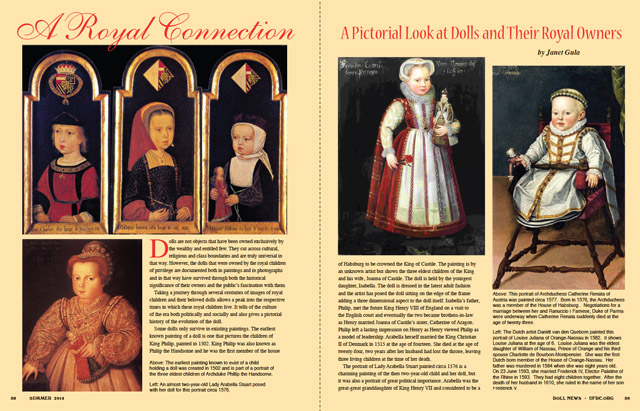 A Pictorial Look at Dolls and Their Royal Owners by Janet Gula Janet Gula is currently serving as UFDC's First Vice-President  Director, ReAL Services.   She has been a Regional Director for UFDC's international Region 16 and has also acted as Public Relations Coordinator.   An avid collector of French bébés and poupées, Janet was awarded the Dorothy and Evelyn Jane Coleman Scholarship for the study of Antique Dolls.   As well, she is an accredited judge of antique dolls, and has judged at both the national and regional level. Janet has contributed numerous articles to Doll News, as well as other doll publications, and has presented many programs at conventions, both national and regional.   She spends her time between her homes in Toronto and Naples, Florida where she has served as club president for the Naples Doll Club.   Janet served for many years as a docent at the Gardiner Museum of Ceramic Art in Toronto and has served on the executive board of the Toronto branch of the Canadian Friends of the Hermitage. 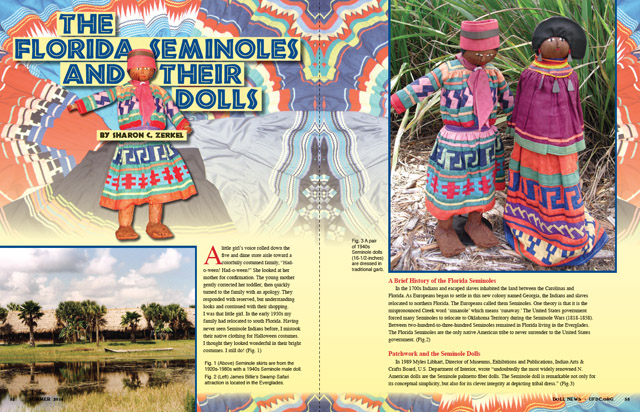 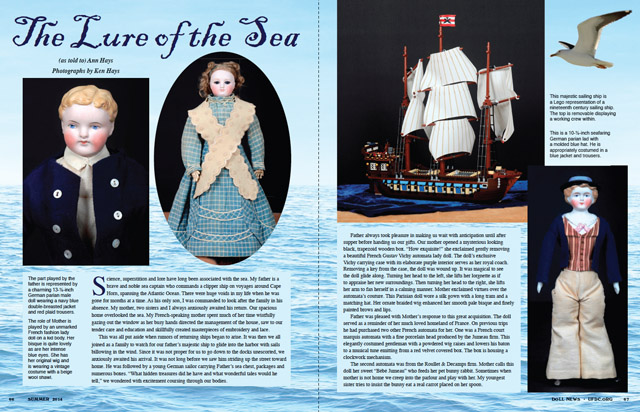 The Lure of the Sea by Ann Hays Ann Hays is a licensed auctioneer with specialty training in antiques and collectible dolls and toys. She is an appraiser on the PBS television series, Antiques Roadshow. Ann is a Certified Appraiser of Personal Property (CAPP) with the International Society of Appraisers. She is a member of the United Federation of Dolls Clubs and is past president of the Derby City Doll Club. She has served as a judge in various competitive exhibits of antiques and has published numerous articles in national periodicals relating to antiques. Ann is a graduate of the University of Kentucky with bachelor's and master's degrees. She serves as a guest lecturer on the Victorian period for historic homes, museums, and clubs. Her lectures include "Life of the Victorian Lady," "History of Antique Dolls" and "Costuming." 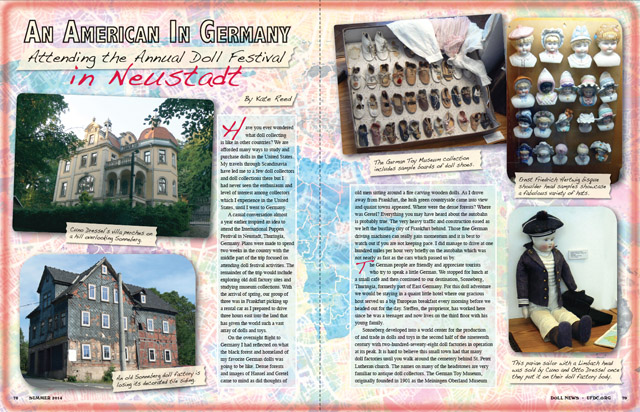 Kate Reed joined UFDC in 2001.   She has attended every national convention since 2004 and many regionals, volunteering in various capacities including serving as an antique judge, organizing fundraisers, working in the UFDC Supply Booth, reviewing audio visual programs, staffing registration, pin sales, and the Loving Care Boutique tables, and providing annual meeting security.   Currently she is the UFDC classroom education chairman. She is a doll researcher having been privileged to study dolls in many museums and private collections in both the United States and abroad.   Her love of antique dolls and their histories fuels her unending search for more information about them.   Kate believes we are only the caretakers of our collections and wants to preserve our antique dolls for the generations coming after us. 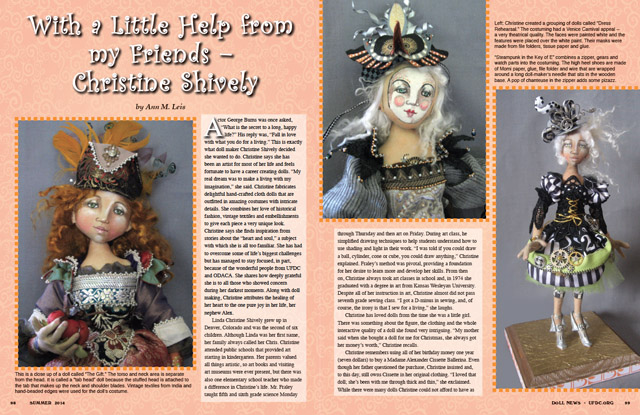 With a Little Help from my Friends "“ Christine Shively by Ann M. Leis Ann M. Leis grew up in Fulton, New York and has loved dolls most of her life. As a child, her best Christmas ever was receiving the Barbie Dream house. She is a member of the 1st Houston Doll Club and is an avid collector of both antique and modern dolls. Over the years, Ann has volunteered for a variety of school and civic organizations. She was President for both high school Band and Choir Booster clubs and held numerous roles within each group.   Presently, Ann enjoys volunteering at her consignment shop for the Charity Guild of Catholic Women. Ann holds a B.S.N in Nursing from Arizona State University and has worked as a surgical, school and recovery room nurse. She does a lot of traveling to help her family and likes to cook, quilt and read. Ann enjoys Jazzercise, Yoga, Swimming and Tennis and has even learned to like football.   Ann had three awesome kids pursuing goals in Marketing, Musical Theater and Engineering and has a wonderful husband who goes along with all of her crazy ideas. She is thrilled to be a free-lance writer "“ and now Associate Editor "“ for Doll News. 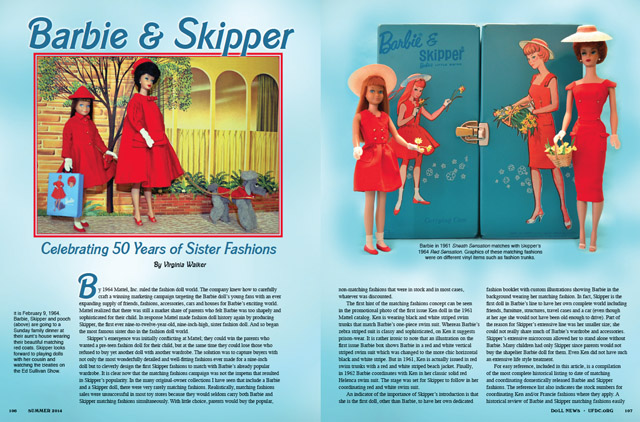 Barbie & Skipper "“ Celebrating 50 Years of Sister Fashions by Virginia Walker It all started with my sister's Barbie and Ken dolls which provided hours of play. I just loved setting up and redecorating Barbie's 1961 & 1965 Dream Houses which I am sure influenced my decision to become an architect. I moved to New York City in 1975, but finally returned to rural upstate New York in 1982 to retrieve my childhood Midge, Allen and Skipper. I would take them out of their case and look at them nostalgically every so often. Then one day my life as a vintage doll and toy collector took off when I saw a collector's book showing all those beautifully detailed Barbie and family vintage outfits. Soon I had an entire room in my apartment lined with shelving to display my ever expending Barbie and family doll collection. I always wanted to set up the ultimate display of not just the Barbie and Skipper 1964-1966, matching fashions, but also wanted each outfit set to be worn by dolls with matching hair color that was just right for that particular outfit.   I never did such a display, but setting up the photos for the Barbie and Skipper sister fashions article was better than my imagined display and now I have the photos forever.
Return To Doll News Archive
United Federation of Doll Clubs, Inc. © 2021 All Rights Reserved.  Privacy Policy