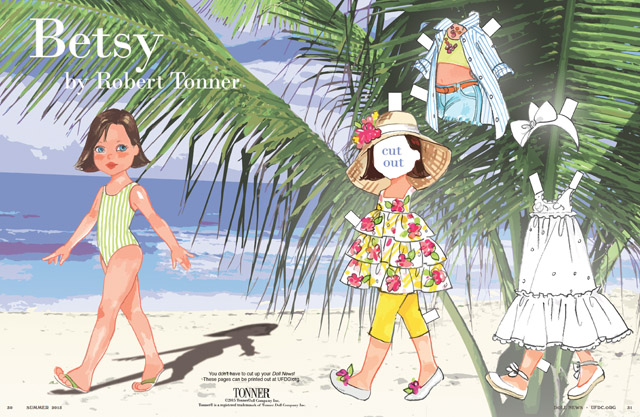 Robert Tonner, known throughout the world for his award winning dolls and fashions, began his career as a head designer for Bill Blass after graduating from the Parsons School of Design. In recent years he has combined his fashion experience with sculpting and design talents to produce the unique and appealing dolls that have established him as a leading doll artist.

Through his designs, the Robert Tonner Doll Company recaptures the magic of classic characters such as Little Orphan Annie, Patsy, Dy-Dee Baby and Betsy McCall. Tonner's "muse" Tyler Wentworth, arguably his most famous creation, is based on a fictional 7th Avenue fashion designer. In 2002 Robert Tonner purchased the Effanbee Doll Company, Inc. with its rich legacy as one of America's oldest doll companies, manufacturing continuously since 1908.

Robert is a past president of the National Institute of American Doll Artists (NIADA) and his dolls have been featured in national and international media including People  magazine, CNN, the Barbara Walters Oscar Night Special, Entertainment Tonight, and British Vogue  magazine. Several of Robert's creations are in the permanent collection of the Museum of Decorative Arts at the Louvre complex in Paris, France. 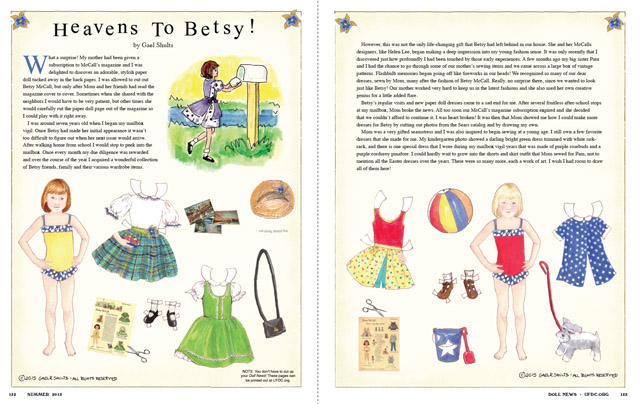 Growing up in Gainesville Florida, Gael Shults began her university art education at the U of F, and had previously to that, begun to sell original works locally. Her mother was an artisan and her father an architect, both of whom encouraged her in this field of interest. Gael has continued to sell her original works, which have been exhibited in arts festivals, galleries and museums over the years. Additionally a prominent catalog company sold a set of her limited edition prints, distributing them throughout the US, Canada and Japan. Her early attraction to dolls and her mother's love of sewing stimulated a life-long interest in both creating and costuming dolls. Designing paper dolls has always been a part of this creative process. Gael, who originally had a difficult time deciding whether to major in art or music has in the end, divided her time between both fields, as well as dabbling in the art of writing, including several works for youth and songwriting. She has won a variety of awards including multiple honors on the local level for her oil paintings, doll making and music. On the international level she has taken grand prizes and first place awards in choir direction and paper doll illustration. Gael has always been greatly energized by teaching the arts to children and has greatly enjoyed directing this award winning children's choir for nearly ten years. On the hobby level, she loves studying history, especially when it pertains to antique fabrics and dolls, and has become an avid, if not obsessive collector of both.

Gael currently resides in American Fork Utah where she and her husband Tom are winding up their parenting career by raising their two wonderful teenage boys, A few dolls who think they are people, two spotted house cats who think they are gods, and the cutest mini schnauzer puppy ever born. She says that she is beginning to understand why old people treat their pets like babies and currently takes joy in costuming dolls, the puppy and their delightful smattering of grandchildren, usually in that order! The little ones are learning to love dolls just like Nana Gael, and she very much enjoys the fact that their older married children live close by, so that she can pass on this appreciation of dolls to the next generation.