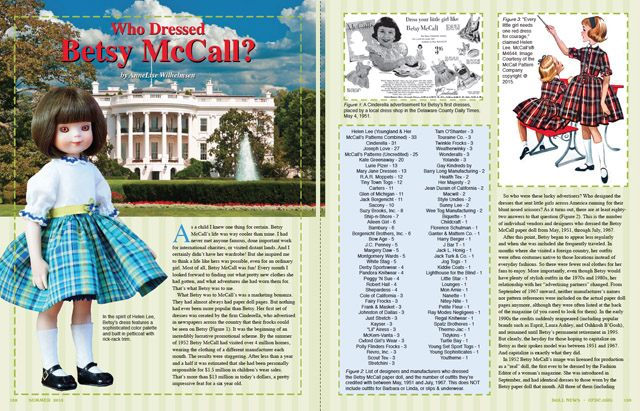 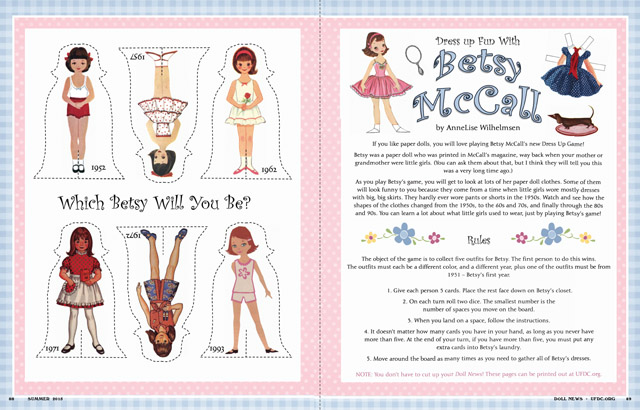 Dress Up Fun with Betsy McCall, a Game

AnneLise Wilhelmsen brings a lifelong love of sewing and years of professional pattern making experience to her position. Her passion for collecting antique textiles and her enjoyment of costuming history have led her to publish articles and patterns in several publications, including Doll News. AnneLise is a Member-at-Large of UFDC, and has won numerous awards for costuming both modern and antique dolls.

As a child, AnneLise always looked forward to visiting her grandmother because her grandmother took McCall's  magazine. But she wasn't allowed to cut Betsy out and play with her because her grandmother passed her magazines on to other family members. When AnneLise was in fifth grade the family moved from the suburbs to a little farm in the country and suddenly she had no friends, not even very many neighbors. AnneLise was lonely and bored! One morning she took a walk and ended up in the hayloft of the barn. It was empty. There was not even any hay. But way over in one corner there was an enormous paper bag. Inside were probably three, maybe more, years' worth of old McCall's  magazines left behind by the previous owner. And for the first time ever, AnneLise got permission to cut out Betsy McCall paper dolls. She played in that hayloft every day after that, and it was warm there because of the heat from the animals down below. Even though it was freezing outside she remembers not having to wear her coat. She just sat on it and cut and cut and cut until she thought her fingers might fall off!

Bibliography for "Who Dressed Betsy McCall"