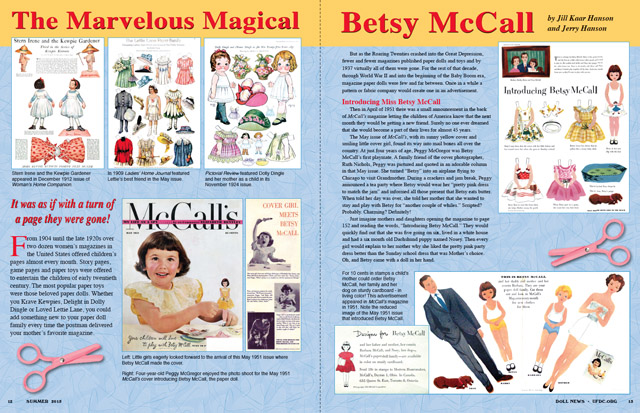 Ever since she was a little girl, Jill Kaar Hanson has loved to play with paper dolls. As a matter of fact, if she could only collect one type of doll, she says it would be paper dolls. Her collection spans over one-hundred years of these affordable toys that encourage children to stretch their imaginations. It also includes over two-hundred pages featuring Betsy McCall. The first article Jill wrote for Doll News was "Magazine Magic" which was published in the Summer 2006 issue.

Jill has been a collector of dolls all of her life.   She has been a NIADA Patron and served as Chair for ODACA's annual luncheon, receiving their Joan Hart Award. She also wrote and produced two first place UFDC audio-visual programs on the "Dolls of NIADA" and "Dolls from Children's Literature".

Jill served as president of The Lake County Doll Collectors of Illinois three times and as Region 10 Director from 2005-2008. Jill and Jerry (her husband and resident doll photographer) are currently  serving as the Chairs of Helpers for the 2015 convention in Kansas City.

Jerry wants everyone to know that as a child, he never played with paper dolls. 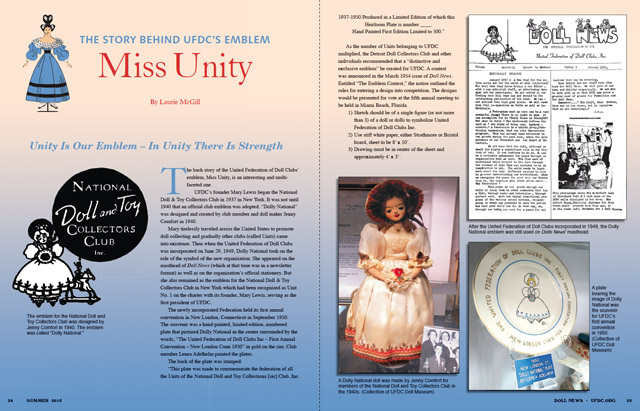 Laurie McGill joined UFDC in 1978 and served as Regional 3 Director (2005-2008). On a local level, Laurie is a member of the Dallas Doll Club, serving as its president (2002-2006 and 2012-present). Laurie was the 2008 recipient of the United Federation of Doll Clubs Award of Excellence for Educational Endeavors. Her original program,The Dixie Doll, was the ReAL Services Audio Visual first place winner in 2004. Laurie was editor for the 2013 UFDC convention souvenir journal, A Capital Affair. She has served as Associate Editor for UFDC's quarterly journal, Doll News. Currently she is serving as editor for Doll News. 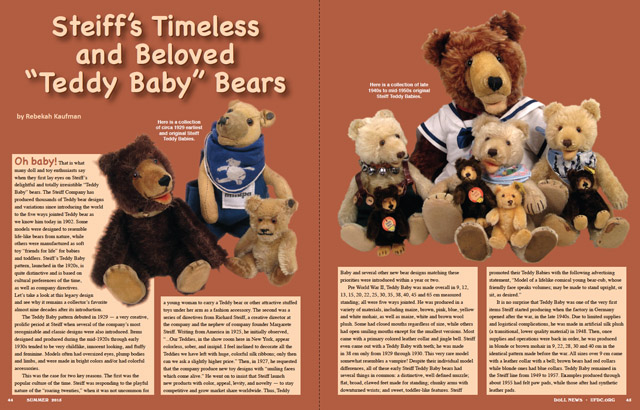 Rebekah's German grandmother introduced her to the Steiff brand forty years ago. Her personal collection now includes over 500 primarily vintage items. Rebekah's passion became her vocation for several years when she worked for Margarete Steiff. Rebekah writes for Teddy Bear and Friends and the Worldwide Steiff Club Magazine. She is also the administrator on the Steiff Facebook fan page. She truly leads the Steiff Life. Contact her at Steifflife@gmail.com with your Steiff questions! 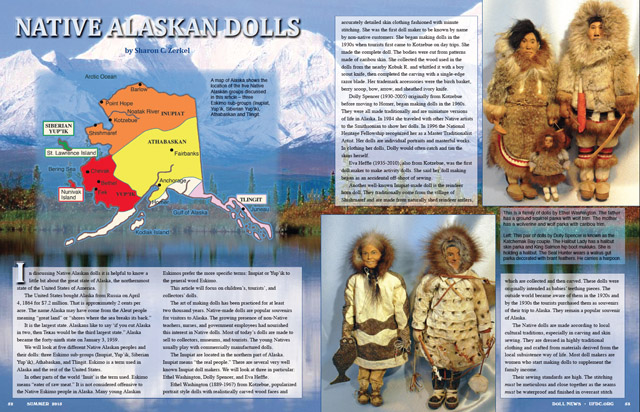 Sharon C. Zerkel is a member of The Ft. Myers Doll Club. She has exhibited her dolls at various venues and presented doll programs to a variety of groups in the community.

She is active in UFDC National Conventions leading a Dynamic Doll Dialogue, presenting a program in 2012, serving as a monitor, then as a clerk, and now as a judge for the antique competitive exhibits.

She contributed an article for the 57th UFDC National Souvenir Journal: Tell Me a Story  and has penned several children's stories most with a Native American theme. Most recently she has authored a reference book on North American Indian dolls.

She can be reached at heritagedolls.zerkel@aol.com 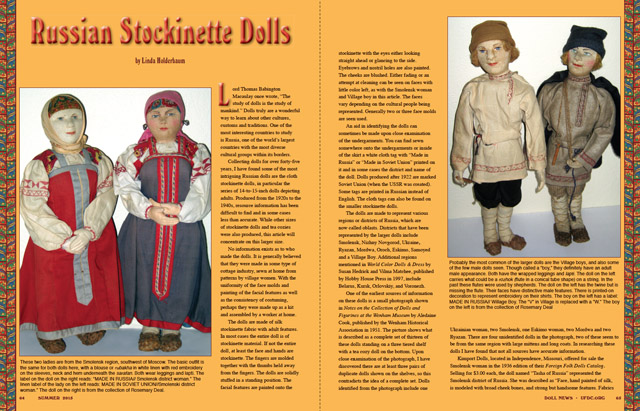 Linda has served as the Executive Director of the Art Center of Battle Creek in Battle Creek, Michigan for the past ten years and was the curator there for 12 years before that. She has been a doll collector since the 1960s along with her sister Rosemary Deal. Her greatest passion has always been ethnic dolls especially Russian dolls and matryoshkas, though she collects all kinds with over 5,000 antique to modern. 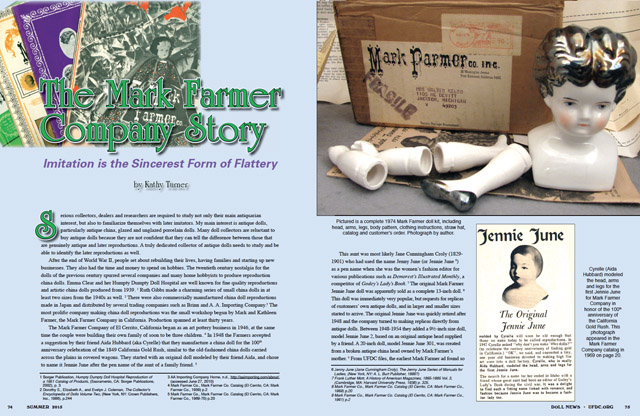 Kathy Turner was raised in the small country town of Summit in upstate New York, by parents with an enthusiasm for collecting and respect for history. Kathy Turner's college background is in art, architecture, and art history, with a major in Fine Arts and a minor in Art History from Towson State University in Maryland. She subsequently studied traditional Japanese woodblock printing for 4 years in Japan. Upon returning to the US Kathy worked for a time for a decorating company in McLean, VA creating decorative murals, custom painted furniture, and faux finishes. Kathy is currently an active and award winning artist living in Arlington, VA with exhibits throughout the area.

Kathy has collected dolls for over 40 years, specializing in early dolls with emphasis on china dolls. She is a member of the UFDC Dollology Doll Club. She has been buying and selling dolls and other antiques and collectibles online for the past 15 years and hopes to use this online experience to benefit the UFDC and Doll News. 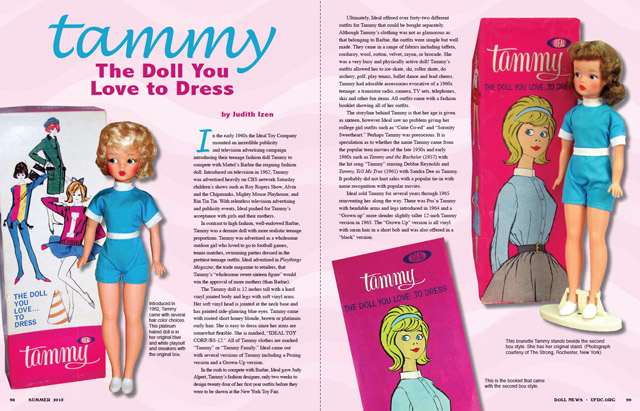 Tammy The Doll You Love To Dress

Judith Izen is a doll historian and toy industry researcher. She is a noted authority on dolls of the Baby Boomers. In addition to her Collector's Encyclopedia of Vogue Dolls: Identification and Values, coauthored with Carol Stover, she has authored books on American Character dolls and Ideal dolls. Her articles have appeared in publications including Doll Collector Magazine, Doll News  and New England Antiques Journal. She also lectures on a variety of doll subjects. A former medical researcher, she has degrees from Boston University and the Harvard School of Public Health. She always welcomes new information about dolls. You may reach her via her website: dollsofourchildhood.com. 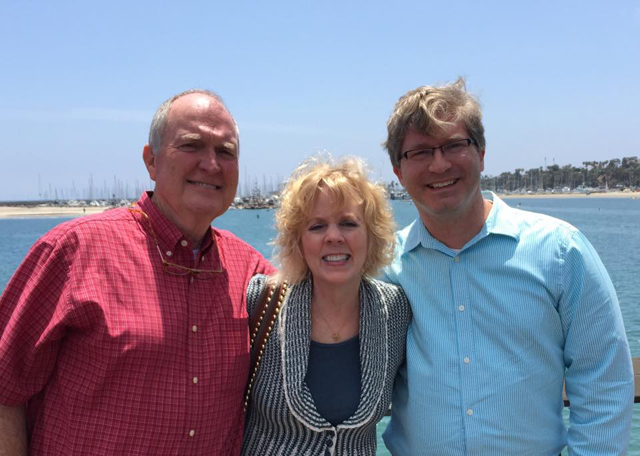 The Care of An American Icon

Former Region 8 Director for UFDC, and Curator for the Doll and Miniature Museum of High Point, North Carolina, Bradley Justice has devoted most of his adult life to his hobby. Although a lover of antique French fashion dolls and cloth dolls from his home state of North Carolina, he has recently returned to his original passion, the Barbie doll. Bradley has curated three museum exhibits with Barbie as the subject, as well as written and provided many programs on the subject. A founding member of the Queen Anne's Revenge Doll Club, Bradley is a member of three additional UFDC doll clubs. In 2008, Bradley was the recipient of UFDC Award of Excellence for the Display of Dolls. 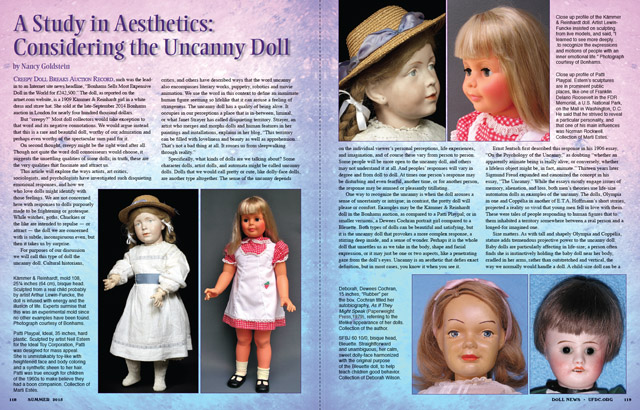 A Study in Aesthetics: Considering the Uncanny Doll

Nancy Goldstein is the author of Jackie Ormes: The First African American Woman Cartoonist (University of Michigan Press, 2008). She has also written on romance and fashion in cartooning in the historical Black Press. Nancy's articles in Doll News  have covered ancient Egyptian dolls, Mary Hoyer, the Patty-Jo doll by Terri Lee, and Jackie Ormes's paper dolls. She has served as judge for UFDC Modern Competitive Exhibits, presented programs at Terri Lee Daisy Chain Conventions, and is a member of Ann Arbor Doll Collectors. 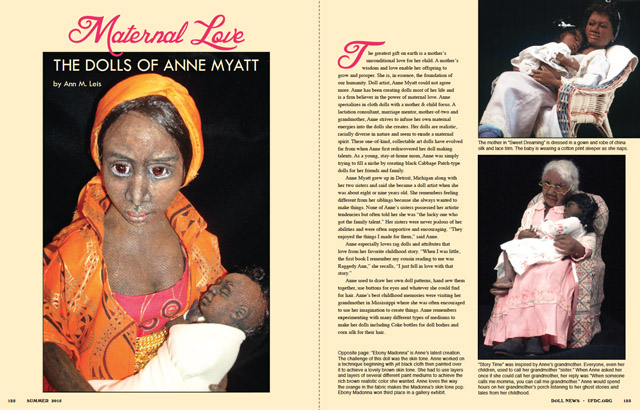 Ann M. Leis grew up in Fulton, New York and has loved dolls most of her life. As a child, her best Christmas ever was receiving the Barbie Dream house. She is a member of the 1st Houston Doll Club and is an avid collector of both antique and modern dolls.

Over the years, Ann has volunteered for a variety of school and civic organizations.

She was President for both high school Band and Choir Booster clubs and held numerous roles within each group. Presently, Ann enjoys volunteering at her consignment shop for the Charity Guild of Catholic Women.

Ann holds a B.S.N in Nursing from Arizona State University and has worked as a surgical, school and recovery room nurse. She does a lot of traveling to help her family and likes to cook, quilt and read. Ann enjoys Jazzercise, Yoga, Swimming and Tennis and has even learned to like football. Ann had three awesome kids pursuing goals in Marketing, Musical Theater and Engineering and has a wonderful husband who goes along with all of her crazy ideas. She is thrilled to be a freelance writer and now Associate Editor for Doll News. 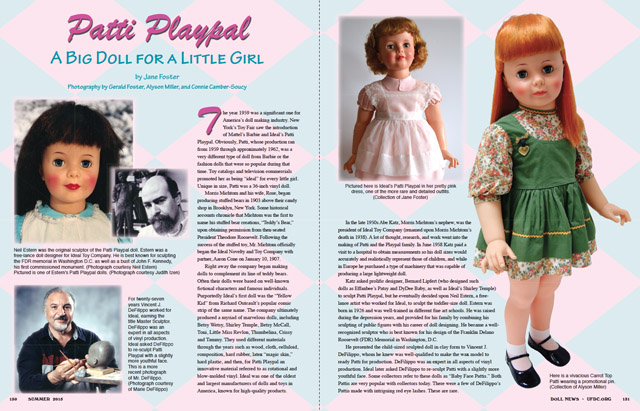 Patti Playpal: A Big Doll for a Little Girl

Jane Foster was an elementary classroom teacher for 38 years. During the last five years she has enjoyed teaching reading on a part-time basis at the elementary level. She is a member of Randolph Street Baptist Church and the Kanawha Valley Doll Club. Jane has written articles for Antique Doll Collector  magazine. She has also had an article published in Doll Collector Magazine, formerly Contemporary Doll  magazine.

When Margaret, one of Jane's dear doll friends passed away, her three daughters shared with her that their mother wanted her to have a doll that Jane had frequently admired during her visits with Margaret. She thought her doll had no marking on her, but recently found the marking 35-5 on her lower back. She has since learned that this marking is very common for Patti look-a-like dolls. So her "Margaret" doll, which wears a lovely yellow dress with cascading ruffles is a Patti Playpal look-a-like, and, of course, she is a very special and sentimental doll in her collection.   Margaret is the inspiration for her article.

The author would like to extend a special thanks to Connie Camber-Soucy, Alyson Miller, Vincent and Marie DeFilippo and Pauline Yohe for their interest and invaluable help with this article. All hats, purses and examples of Peter Playpal featured are from Alyson Miller's collection.

Also, the author would like to express thanks to Henrietta Pfeifer for allowing her to photograph many of her museum Patti Playpals, and to Jan Taylor for the submission of her museum display scene.

Finally, the author would like to thank Ann Estern for her invaluable assistance.