The UFDC Museum is currently closed to the public due to governmental restrictions and will reopen once the restrictions are lifted.

The History of UFDC

Mary E. Lewis was a dedicated doll collector, author and lecturer from Brooklyn, New York, with a passion for sharing dolls. She was convinced like-minded people would share her devotion. In 1937, Mary Lewis arranged an appearance on Mary Margaret McBride’s radio broadcast inviting any interested doll collectors to meet her at the Hotel Pennsylvania in New York City. Eight ladies responded, and the National Doll and Toy Collectors Club was formed. In the following years, Mary Lewis traveled extensively, giving lectures, exhibiting dolls, and encouraging collectors to organize clubs. The clubs were called units, with National as the first unit. Units followed in Baltimore, New Haven, Cleveland, Pittsburgh, Philadelphia, Chicago, Detroit, Seattle, Tacoma, Oakland Bay, and Grand Rapids. In 1940, Unit 14 was formed: the S. Maude Jones Junior Unit. DOLL NEWS was first issued as a newsletter in 1941. 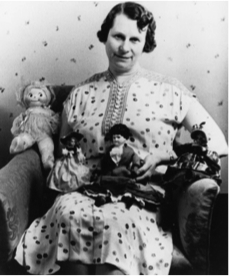 Unit clubs across the country continued to grow and Mary’s dream of a federation of clubs and a doll museum was becoming a reality. WWII interfered, but finally, in 1949, the eight ladies signed the Articles of Incorporation for an organization to be known as the United Federation of Doll Clubs, Inc. A Justice of the Supreme Court of New York approved the Articles, and the Certificate of Incorporation was issued on June 29, 1949.

At the National Doll and Toy Collectors Club’s annual luncheon in April, 1950, it was announced and approved that clubs were to be known by individual names and issued Charter numbers. Plans were made for a National Convention, to be held in the fall.

The first annual convention of all Units was held in Connecticut, September 15-17, 1950. The agenda was to elect Officers and Directors, appoint an attorney and CPA, set new Charter rates and eligibility, and select the next convention city. There were a total of sixteen units, with the National Doll and Toy Club as Unit 1. Mary Lewis was elected the first President of UFDC, Inc. Convention registration was $10 and the souvenir was a plate with the Dolly National logo in the center.

The UFDC, Inc. logo was changed to Miss Unity in 1955. This emblem was inspired by a doll in a lithograph of a toy seller and her wares by Charles Philipon, dated 1830. The original design showed a stick horse in each hand, but the horses were removed upon adoption by UFDC.

The International Region became the sixteenth geographic region in UFDC in 1975.

For the first thirty years of the Federation, all records were kept by the president and moved from one area of the country to the next as each succeeding president was elected. Ralph W. Griffith and Elmer Bell, dealers and owners of a doll museum in Parkville, Missouri, offered space in their building for a corporate office. The New York State incorporation was no longer adequate for the Federation and the not-for-profit structure in the State of Missouri was favorable, so a decision was made to move to Missouri. Re-incorporation required changes to the National Bylaws and to the Standard Club Bylaws. This process began in 1979 and was completed on December 1, 1981. All records, slide programs, the library, and archival materials were moved from the homes of officers to the new corporate office in Parkville, Missouri, near Kansas City. UFDC was now recognized as a 501(c) 3 charity by the Federal Government.

Region 2 was divided into Region 2-North and Region 2-South to accommodate the large number of clubs in these areas. The Board of Directors was now made up of the Executive Committee and seventeen Directors, one from each geographic region.

In 1982, UFDC hired its first paid employee, a Secretary/Office Manager. UFDC assumed management of the annual National Convention in 1983. Convention Service charms were given to volunteers. The Modern Competitive Exhibit was instituted and Highlight Tours of both competitive and special exhibits were introduced.

By 1991, UFDC had outgrown its office space and the Central Office moved to a new building on Ambassador Drive, located just five minutes from the Kansas City International Airport. At this time, the staff numbered three: Office Manager, Bookkeeper, and Secretary/Receptionist. Research and Archival Library Services (ReAL Services) was formed, comprised of six departments: Ephemera, Archives, Audio-Visual Education, Classroom Education, Information, and Publications. The motto is: Preserving Yesterday and Today for Tomorrow.

The Internet domain name, UFDC.org, was obtained for UFDC and the web site was established in 1995.

The UFDC Research Center was opened at the Des Plaines, IL, Library in 1997. The United States Postal Service unveiled the “Classic American Dolls” postage stamps at the National Convention in Anaheim. The Administrative Staff increased to three full-time and two part-time employees.

Mary Lewis’ dream approached reality when, in 1998, Target 2000—Building for the Future was introduced at the National Convention in New Orleans and a Building Fund was established. The goal was a permanent home for UFDC with room for research facilities, library, museum, and administrative offices in one location. Dynamic Doll Dialogues were a new feature at the National Convention.

UFDC’s 50th Anniversary was celebrated in 1999 at the National Convention held in Washington, DC, with nearly 2,000 registrations. The Research Center at the Des Plaines Library closed and archives were returned to Kansas City. The movement for funding a permanent home advanced with a variety of fundraising activities, including a UFDC bear.

Bylaws were changed in 2000 to include a category for online clubs. In 2001, UFDC purchased its first permanent home at 10900 North Pomona Avenue in Kansas City. The first scholarship was awarded at the National Convention. The Mary Lewis Legacy Society had its first members, who pledged to include UFDC in their wills.

In April, 2002, the grand opening of UFDC Headquarters was held with nearly 500 people in attendance. Mary Lewis’ dream of a federation of clubs and a doll museum had been fulfilled.

Policies and procedures were adopted in 2009 to provide improved oversight of UFDC operations and finances. These new policies and procedures brought UFDC into compliance with more strict Federal regulations regarding not-for-profit organizations. IRS guidelines were provided to clubs. In 2010, the UFDC.org website was redesigned and launched to include an online shop. In 2011, a Standing Fundraising Committee was established to facilitate the financial success of UFDC through short-term and long-term fundraising projects. A Standing Collections Committee was established in 2011 to oversee UFDC’s museum and archival collections. A Standing Membership Committee was established in 2012 to facilitate membership growth.

UFDC entered the 21st century facing many challenges. UFDC presently has two full-time employees, one part-time employee. There are four officers and seventeen directors who volunteer their time to make the organization run smoothly. A new website was launched, enabling members to catch up with the latest UFDC news and learn about upcoming events and donation possibilities. It also enables Members-At-Large to join/renew online and all members to shop online and register for convention online.

As with many other organizations, 2020 proved a challenging year for UFDC. The corona virus led to the cancellation of the Annual Convention in Dallas and many clubs were not able to meet in person. With its usual resilience and positive attitude, "the UFDC show must go on," on the same dates as the Dallas convention, UFDC held its first ever online event – the "OnTime OnLine Doll Celebration!" – with a great mix of programs and online sales opportunities.

Our technology journey continued – to help members keep connected, UFDC purchased a Zoom license for each Region. Many clubs started to use that to have their meetings and a number of the Regional Directors organized region wide Zoom gatherings. Weekly email blasts were initiated as part of the overall drive to keep members up to date with the latest events/news. A project was kicked off to get the UFDC Library online. Our new website company moved our website to a more secure platform, and we started updating the content and modernizing the look and feel of the site. The front page was updated regularly to show "what's new" and "what's current" and the long-awaited uploading of museum photos/videos and DOLL NEWS archives got underway.

Finally, the "+1 Challenge" recruitment campaign was launched with individual members, clubs and Regional Directors working together to increase our Club, Member-At-Large, Library and Museum memberships and our Junior Collectors.

So, although 2020 was a tough year, it also proved to be a year of innovation.

The membership has shown its support and determination to keep UFDC growing and keep Mary’s dream alive for centuries to come.