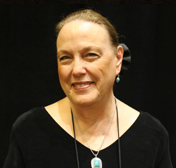 Welcome to Region 9. In 2014 I retired from my Library Media Specialist position at Duluth High School and then worked for two years as the Senior Archivist at Georgia Power Company in Atlanta. I hold a PhD in Library Media Technology with certifications in Educational Leadership and Library Media.

My parents are responsible for starting my doll collecting. Though I played with dolls as a child, it was not until my parents - Marge & Lee Trentham - gave me 25 modern dolls out of a collection they purchased in the early 1970s that my serious collecting began. My early collecting was anything Madame Alexander as those were the dolls I played with as a child. But through the years I have narrowed my collection to Madame's cloth dolls as well as Alice in Wonderland - and as a 'book pusher' my dolls share shelves with the books from which their characters originated. In 1982, I authored the book, Alexander's Rag Line, focusing on the vintage Alexander cloth dolls.

I joined UFDC in 1974 as a member of the Atlanta Doll Club and was active in the club until I started working when I became a Member at Large. Since joining the national organization I have worked as a modern judge serving as Chair of Judges Modern, Chair of the Modern Competitive Exhibit, and Chair of the Highlight Tours. I have also presented seminars and programs at regional and national conventions along with articles in Doll News and souvenir books. I have also been an active member of the Madame Alexander Doll Club serving on its board and as president.

Now as the President of the Greenville Doll and Toy Collectors Club, I travel to Greenville each month to play dolls with doll friends. I look forward to connecting with clubs in Georgia, Florida, Alabama and South Carolina as we work to increase membership and spread the love of dolls throughout Region 9.